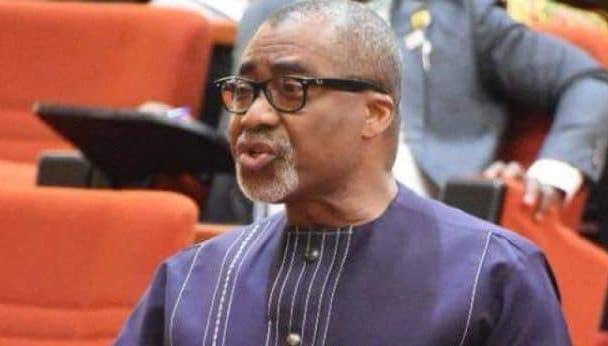 The Minority Caucus of the National Assembly has threatened to use its legislative powers to move against President Muhammadu Buhari if he continues to breach the constitution.

The Caucus made the threat on Tuesday in Abuja at a press briefing addressed by its leader, Senator Enyinnaya Abaribe, listing the various constitutional breaches which it said it would rely upon to invoke its constitutional powers, should the breaches persist.

According to Abaribe, the caucus was saddened that Buhari had failed to guarantee the security and welfare of Nigerians, which he said is the primary purpose of the government, expressing disappointment that the current regime has mismanaged the economy to the point of near collapse. This, he said, should not be allowed to continue.

He said: “The caucus has taken note and will continue to take note of the constitutional breaches that are happening at this time by the government of the APC.

“We will at the appropriate time utilize all constitutional methods and measures available after consultations with our colleagues, to do the needful to save the country from collapse.

“PDP expresses very strong concern about the ineptitude and the inability of the APC-led government to arrest the drift to anarchy of our nation at this time.

“This APC-led government, at inception and during campaigns prior to 2015 elections, made promises to the Nigerian public, the first of which was that they were going to deal with security challenges within their tenure.

“Sadly, and most unfortunately, from 2015 to date, rather than resolving the security situation, the APC-led federal government had rather broadened the security challenges.

“So, from the problems of the North East, it has spread to other parts of the country. Virtually all parts of Nigeria are now beset with one security challenge or the other.

“We, therefore, as a caucus, suggest that immediate steps should be taken by governments at all levels to set up proper security infrastructure whether in the mode of state police and other constitutional reforms to arrest the drift of the nation.”

The minority caucus also called on the Buhari administration to stop borrowing because its effects were not being felt by ordinary Nigerians.

The Caucus also said further: “We have not seen our President. We have not heard from our President despite the daily killings that have turned Nigeria into a killing field of unimaginable proportions.”

The opposition members also demanded for the sacking of the Minister of Communication and Digital Economy, Isa Pantami.

“We, as a caucus, are opposed to the continued superintendent of the NIN registration by someone whom the country has lost confidence in”, the Caucus said.

Buhari Felicitates With Actor Olu Jacobs As He Turns 80

Buhari To Host Tinubu, Akande, Others To Iftar Breaking Of Fast...

Your Family Will Be Safe’, 2baba Pens Emotional Tribute To Sound...