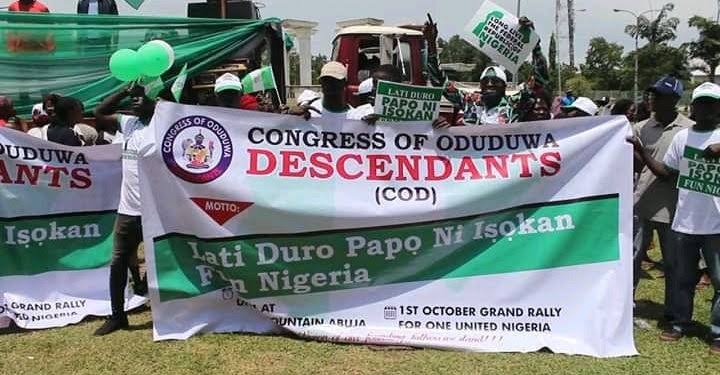 The Yoruba self-determination rally organised by the Ilana Omo Oodua is underway in Ibadan, the Oyo State capital, despite earlier efforts by the police to scuttle it.

According to reports, hundreds of members of the group, who had initially scheduled the take-off of the rally for the ancient Mapo Hall, were said to have changed the venue due to the presence of the police.

The agitators, who are armed with banners and Yoruba nation flags, had their leaders address the people, insisting that Yoruba people are tired of staying with Nigeria.

One of the leaders of the group, Bashorun Kunle Adesokan, in his address, said Yoruba were no longer part of Nigeria and the people want to be an independent nation.

Adesokan, who condemned the insecurity in Yorubaland, said the people could no longer stand the injustice in Nigeria.

He said: “We are no longer part of Nigeria. Yoruba people are determined to stand alone. We are starting the rally here in Ibadan because this is the capital of the Yoruba nation.

”Our brothers in Kwara, Lagos, Kogi, Edo, Delta and other states are here. We are not going to use violence, we want the Yoruba nation. No retreat no surrender. Let Hausa go their way, let Fulani go their own way and Igbo people should also go.

“The rally has taken off, we won’t stop until we achieve our aim.”

An Itsekiri youth leader, who also addressed the rally, Isaac Ajatitan, said Itsekiri people were part of Yoruba and would support them to achieve this aim.

Okorocha Absent From Arraignment As EFCC Accuses Him Of Evading Charge

PDP Chairmanship: Ayu, Shema, Nazif To Slug It Out At Party’s...