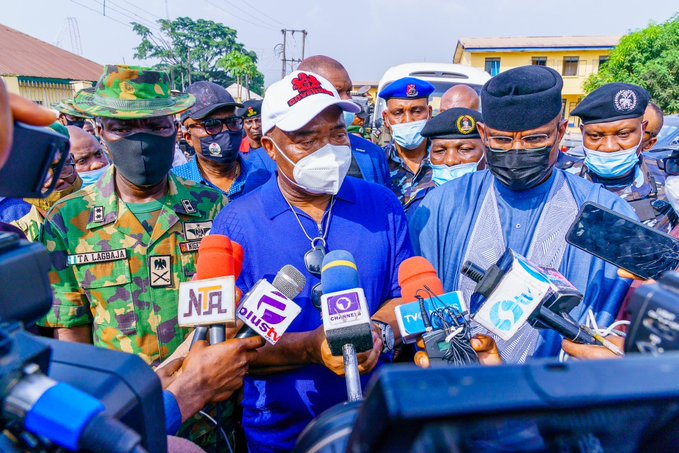 Imo State Governor, Hope Uzodinma has blamed members of the proscribed Indigenous People of Biafra (IPOB) for the attack on the state Police Command headquarters and the Owerri Correctional Centre on Monday, adding that the group was out to create fear.

NaijaNewsNow reports that gunmen, in the early hours of Monday attacked the Owerri Correctional Centre, releasing 1,844 inmates and the state police headquarters, where detainees at the State Criminal Intelligence and Investigation Department (SCIID) were released and vehicles parked in the premises burnt.

Uzodinma, who visited the attacked locations, said has met with the heads of the security agencies in the state and assured that the government is on top of the situation.

The governor said a statement issued by his office: “I condemn in strong terms, the Monday wee-hours attacks on facilities belonging to the Police and Correctional Services in Owerri. The development is regrettable and I call for a thorough investigation into the dastardly act.

“Criminal elements claiming to be members of the Indigenous Peoples of Biafra (IPOB), had attacked the Imo State Police headquarters and Owerri Correctional Services Centre with various degrees of dangerous weapons, destroying buildings, vehicles and other sensitive official materials and unlawfully setting free inmates which the authorities said were over 1800.

“The primary aim of the IPOB members who carried out the attack was to create fears in the minds of the people and at the same time, strive to secure the release of their fellow criminals in custody.

“However, the government is on top of the situation, fully aware that the primary reason government exists is the protection of lives and property of the citizenry.”

TCN Says It Has Restored Power Supply To Kaduna

Birds Of The Same Feather! Gbajabiamila Says Succession Agitators Are No...