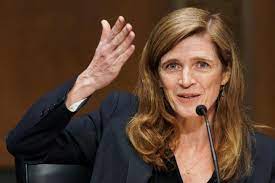 The United States Agency for International Development {USAID} has described the ban on the operations of Twitter in Nigeria as a state backed denial of free speech, demanding an immediate reversal.

The USAID Administrator, Samantha Power, using her verified Twitter handle, argued that there are nearly 40 million users in Nigeria using the platform, as the country is home to Africa’s largest tech hub.

NaijaNewsNow reports that the Federal Government placed an indefinite suspension on the operations of Twitter, claiming the site was being used to undermine the corporate existence of the country.

The ban was also followed by a threat of arrest and prosecution of violators by the Attorney General of the Federation and Minister of Justice, Abubakar Malami.

Ebonyi State House Assembly’s Magical ‘Adabcadabra’: Why Umahi Must Not Be President

EFCC Is Monitoring The Source Of Funds Used In Buying Presidential...