Embattled Unity Bank is currently battling with another scandal involving alleged diversion of funds belonging to members of the Ogun State chapter of the Association of Senior Civil Servants of Nigeria.

The civil servants, on Monday, shut down the daily activities of the Ita Eko branch of the bank, over the alleged diversion of N134 million investment fund.

The outraged senior civil workers displayed placards that read “Funds Not Safe In Unity Bank,” “Unity Bank Stole Our Money,” and “No Refund, No Retreat, No Surrender.”

The Ogun State Chairman of the association, Comrade Olude Isa Owolabi, while speaking on behalf of members, said members instructed the bank to transfer their investments into another bank account, adding that the bank ended up moving a lesser amount into the provided account.

Owolabi said: “We received an emergency call sometime last year that Unity Bank, Abeokuta branch was cheating clients, and because we are a proactive union, we rose to the situation and asked the lender to transfer money from our Investment account to another account.

“Unfortunately, Unity Bank sent a smaller amount than we expected, leaving us with a substantial balance in our account.

“We’ve had many interactions with them, we’ve called them, we’ve written several letters, at least six or seven, and they have not responded.

“The bank’s managing director should be questioned about the scam.

“The problem started in February of this year, and they have yet to repay our money to us. We can’t keep waiting for Unity Bank to become free.

“They’ve admitted that they took advantage of us. In our office, we have records to prove it. They acknowledged that the funds are available and that they will be transferred as soon as feasible.

We haven’t heard anything from them since then,” he said.

Owolabi further disclosed that the association’s investment money was N134 million, with N80 million remitted to the organization and a balance of around N54 million outstanding.

A bank official, who did not want to be identified because he was not authorized to speak on the topic, said the bank had never refused the association access to their funds.

“The problem is already with the Central Bank of Nigeria (CBN),” he said.

He also said that until the CBN completes its inquiry, the bank will not be able to make any more transfers as requested by the association. 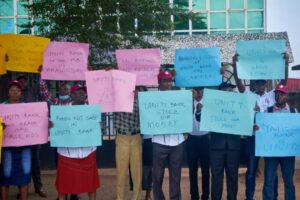 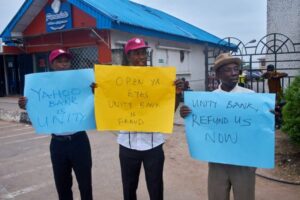 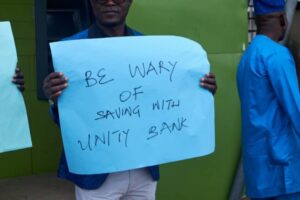 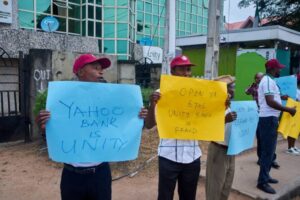