Home Scoop Umahi Reveals Those Allegedly Behind Insecurity In Ebonyi 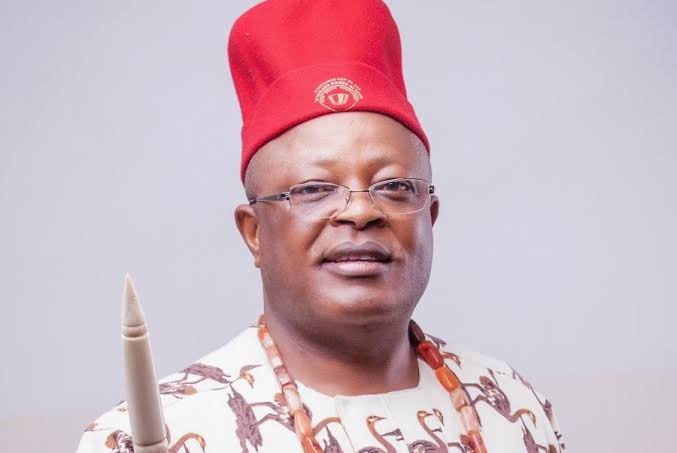 Ebonyi State Governor, David Umahi, has revealed the identities of some political leaders in the state he alleged to be behind insecurity in the state, including attacks on security agencies.

Umahi, who also threatened to bring the full weight of the law to bear on the prominent citizens of the state for inciting violence, stated these when he hosted the Assistant Inspector General of Police, Zone 9, Mr. Okon Ene in his office late Wednesday.

The governor, who mentioned people like former Governor Sam Egwu, former Secretary to the Government of the Federation, Anyim Pius Anyim, Linus Okorie, Ali Odefa, Chidiebere Egwu, Silas Onu, Amos Ogbonnaya and Fred Udeogu, as some of those inciting these bandits, urged the police chief not to look very far when searching for those terrorizing the state because most of them were within.

He said: “It’s very regrettable that a former governor of this state, who appropriated the wealth of this state unto himself, could be inciting a crisis in the state and incite the youths of the state and nobody is doing anything about it.

“When we had an attack on the Ngbo axis, his own local government, all he could do was to go and organise a press conference and said Fulani people came and killed the people.

“He didn’t come home to ascertain the situation and see things for himself. So, that statement incited more crises within that location.

“But the truth remains that the Agila traditional ruler was the one that hired mercenaries whether they are Fulani herdsmen or who to do the killings. And how did we know?

“The Agila traditional ruler was calling our people on the phone and intermittently giving the phone to a herder to talk to us. And the herder would talk to us and say, ‘We are with that corpse that you are looking for. We did the killing.

“Only two days ago, the same Dr Sam Egwu again started saying that the killing of the police is masterminded by Ebube Agu, which is our own internal control security. This tells you he knows about the killings.

“Let me tell you —the same Sam Egwu, Linus Okorie; I have their names: Ali Odefa, Chidiebere Egwu, Silas Onu, Amos Ogbonnaya and Fred Udeogu, are the people inciting these bandits. None of them, including Anyim Pius, has ever come out to condemn the killings in Ebonyi State.

Ganduje Confirms There Are Cracks In APC, Says It’s Not One...