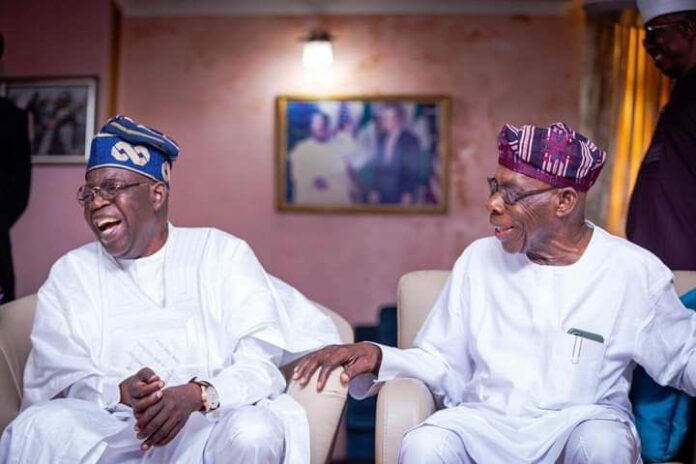 It came without notice, and truth be told, not many people, especially those with a sense of history, expected Wednesday’s visit of the presidential candidate of the All Progressives Congress (APC), Asiwaju Bola Ahmed Tinubu to former President Olusegun Obasanjo.

Wednesday’s visit by Tinubu, in the company of APC chieftains, including the Ogun State Governor, Dapo Abiodun, two former governors of Ogun, Aremo Segun Osoba and Otunba Gbenga Daniel, is a perfect demonstration of the saying that, in politics, there are no permanent enemies but permanent interest.

Those who are conversant with the recent history of Nigeria’s democratic journey since 1999, will readily agree that the relationship between Obasanjo and Tinubu over the years have been more of a cancerous animosity, mutual suspicion and mistrust, with Tinubu taking every given opportunity to vilify the former president.

Nigerians will recall that long before the presidential primary of the APC, Tinubu, more than any other aspirant for the 2023 presidential ticket of his party, embarked on cross country trips to virtually every part of Nigeria, in what he termed consultation. He toured every part of the South-West, visiting traditional rulers, party members and delegates and social-cultural leaders of the zone, including Afenifere, before moving to other parts of the country. For many, this conforms perfectly with the yoruba adage that says ‘ile lati nko eso rode’, meaning charity begins at home.

Curiously, however, in all his junketing across the country, Tinubu never at any point made a stop at Obasanjo’s residence, though he was in Abeokuta to meet with delegates of the APC and the traditional institution in Ogun on two occasions. This, his many vociferous supporters believed was because Obasanjo is inconsequential to his presidential ambition, just as they still do.

The frosty relationship between Tinubu and Obasanjo, is however not without reason. It is believed in many quarters that the sore relationship between both men dates back to the 2003 general elections, when the former president, then sitting, was said to have deceived and dribbled governors of the South-West states elected on the platform of the Alliance for Democracy (AD) to support his reelection as president, while he, Obasanjo, in turn, would support their reelection.

The agreement, however turned out to be a scam, as only Tinubu survived the onslaught of the Peoples Democratic Party (PDP) in the election, as every other state in the South-West was ‘captured’ by the then rulling party.

To add insult upon injury, Obasanjo, in the controversy that emanated from the creation of additional local government areas by the Tinubu administration in Lagos State, seized allocations meant for LGs in the state, thereby putting the state in a precarious financial position that was only survived through ingenious revenue mobilisation in the state.

Since then,Tinubu and Obasanjo had always being at daggers drawn, throwing jabs at each other, with Tinubu more caustic in his verbal war against the former President.

Of particular instance is a video of a campaign outing where Tinubu described Obasanjo as an ‘expired milk’ that should be dispensed with.

Speaking at the Teslim Balogun Stadium, Lagos during presidential campaign rally of the APC in January, 2019, Tinubu said: “Obasanjo came and we taught them that there is no other way for business evolution and revolution without steady power supply. I introduced independent power generation. What did he do? He and Atiku opposed it. I went to court and Osinbajo was my lawyer. I won in court and we started generating 300MW; the first state to do it. Imagine 1999, if Nigeria had made that dedication to electricity generation, you will not see Dunlop, Michelin move out of this country. Look at our roads; look at the vehicular density of Lagos alone. And they call one man Obi somewhere in one party. He said he will create jobs. He has not been able to tell us how we can make brake pads, wheel spanner on our own for those vehicles. And he said, maybe we should extend the port to Benin Republic, so that we can clear our cargo faster. I call that one ‘container economy, Obi China’.

“I want to sympathise with our friends, our foreign observers. You’re welcome. Observe what you need to observe, write your report in peace and go home. This is our democracy. America is still questioning its own democracy. We’re watching CNN; Trump and China, Trump and Russia. Interference in the largest African democracy is what we are saying. G-20, in year 2003 (sic), asked Umaru Shehu Yar’Adua of blessed memory, ‘what are you going to do with the election in Nigeria?’ He said: ‘The election that brought me as president of this country is flawed and I will reform it’. Is that not correct? Who conducted that election? Obasanjo is the greatest election rigger in this country. He’s an expired milk. Dump him in the dustbin. Forget Obasanjo.”

At another campaign rally on January 21, 2019 at Ramat Square, Maiduguri, Borno State, Tinubu threw another jab at Obasanjo asking him to keep quiet.

“You can hear the other expired leaders like Obasanjo, ranting and lying. Don’t believe him, don’t trust him. He is expired.

“With the sign of senility experienced by our dear brother, Uncle Obasanjo, I think Ota should be enough a retirement place to keep quiet”, the former Lagos State governor had said.

However, with the current realities and with an impending presidential election starring him in the face in February, 2023, Tinubu, by his visit to Obasanjo, seems to have taken all his words back!

Seeking the blessing of the former President is synonymous to the regeneration, revitalisation and complete rebranding of the ‘expired milk’ that must be ‘dumped in the dustbin’ with a new manufacturing Date.

The moral of Tinubu’s visit to Obasanjo on Wednesday should not be lost on Nigerians and the many youths who run over one another and turn friends to enemies.

For your mental health and well-being, take whatever a politician says with a pinch of salt, as only their interest is permanent. When interest comes to play, an expired milk can get a new manufacturing date!