The speculated presidential ambition of the National Leader of the All Progressives Congress (APC), Asiwaju Bola Ahmed Tinubu, may after all not be the rumour many have come to term it.

This is as inside sources close to the former Lagos State Governor have leaked what may be Tinubu’s seven-point manifesto believed to be capable of turning around the fortunes of the most populous black nation on earth.

NaijaNewsNow reports that talks about Tinubu’s presidential ambition became rife while he was in London recuperating from a knee surgery he had in United Kingdom, after his London home became a Mecca of some sort, with the nation’s political heavyweights, starting with President Muhammadu Buhari, who took turn to visit him.

Though most of the visitors attributed their visit to the need to check on Tinubu, a notable leader in APC and the nation’s political family, and show him solidarity during his period of recuperation, the cart was somewhat let out of the bag when a viral video of the visit of the Northern Caucus in the House of Representatives showed one of the London visit delegate saying “see you soon Mr President.”

A1side the London visits, a group, South-West Agenda For 2023 (SWAGA), led by Senator Dayo Adeyeye, has been drumming support for a Tinubu presidency, launching the group in various states in the South-West.

As SWAGA continue with their mobilisation efforts, posters bearing Tinubu’s picture for the 2023 presidential election have also surfaced in different cities in the country, putting some form of authenticity to the rumoured presidential ambition of the Third Republic Senator.

As if to consolidate on what his associates have been doing in his absence, Tinubu, since his return to the country, has also been making trips and visits many political analysts believed to be heavily pregnant and aimed to consolidating his rumoured ambition. 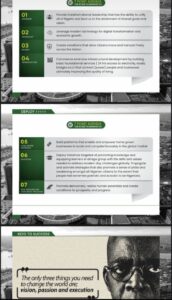 His recent trip to Kano, to commensurate with Alhaji Aliko Dangote over the death of his younger brother, Sani and Saturday’s visit to a former Abia State Governor, Senator Orji Uzor Kalu, have also lend credence to the fact that the APC chieftain is only taking his time to make proper consultations before formally making a declaration for the presidency.

Even more significant is a statement credited to the Minister of Works and Housing, Babatunde Raji Fashola on Saturday that Nigerians should wait till January 2022 for Tinubu to declare if he will contest or not, a statement many have interpreted to mean that Tinubu will be declaring his presidential ambition come January 2022.

As the nation waits for the January moment of truth, a source close to the Tinubu camp, in an exclusive chat with NaijaNewsNow, said it is no longer whether Tinubu will run for the presidency or not, claiming that his camp has gotten past the stage of uncertainty but already developing a policy direction, starting with what he called a seven-point manifesto aimed at revamping the nation’s economy, tackling insecurity, consolidating Nigeria’s position in the world of technology, responsible leadership, closing the infrastructure gap, making the nation business friendly, tackling challenges in the education sector and finally laying to rest the issue of restructuring and deepening Democratic processes.

The 7 point agenda, christened the Rebirth Manifesto as obtained by NaijaNewsNow is as follows:
1. LEADERSHIP
Provide transformational leadership that has the ability to unify all of Nigeria and lead us to the attainment of shared goals and vision.

3. SECURITY
Create conditions that allow citizens move and transact freely across the Nation.

5. HOMEGROWN BUSINESSES
Build platforms that enable and empower homegrown businesses to scale and compete favourably in the global market.

6. EDUCATION
Deploy initiatives targeted at promoting knowledge and equipping learners of all age groups with the skills and values needed to address modern-day challenges globally. Propagate and activate strategies that also promote a sense of pride and awakening amongst all Nigerian citizens to the extent that people feel extremely patriotic and ecstatic to be Nigerians.

With the seven-point agenda, the rumoured Tinubu presidential ambition may just be a reality after all!