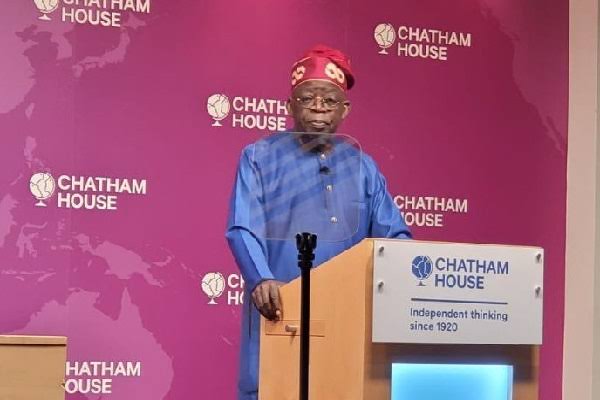 The Director, Strategic Communications of the National Election Management Committee of the Peoples Democratic Party (PDP), Chief Dele Momodu, Tuesday, described the performance of the presidential candidate of the All Progressives Congress (APC), Asiwaju Bola Tinubu at his appearance at the Chatham House, London as less Impressive.

According to Momodu, the chieftains of the APC were ‘window-dressing’ Tinubu on a global stage.

In a piece titled, “Weep not for Tinubu but Nigeria,’ Momodu slammed the handlers of the former Lagos state governor for causing the nation a huge embarrassment on a global stage.

“Call it what you will, what happened at Chatham House, London, yesterday (Monday), was a complete charade. The Tinubu handlers fumbled, and bungled it big time. They showcased him like a packaged invalid. It would have been better to present him as a brilliant politician and administrator, warts and all, who is capable of independent thoughts. No man is perfect. His gaffes would have been more pardonable and acceptable. He was expected to sell his own vision and mission.

“But what we saw yesterday was a theatre of the absurd. It brought back memories of our great former President Umaru Yar’ Adua and how he mysteriously disappeared from radar and some of his aides governed by proxy. I was one of those who led the ‘Enough is Enough’ protest against the Yar’ Adua cabal in Abuja in 2010. What was unacceptable then is even more unacceptable now with benefits of hindsight. Our country should be placed above friendship.

“Truth is, the problem of Nigeria is often aggravated by the voluptuous ambitions of some acolytes who wish to remain eternally relevant in the corridors of power at the expense of the long-suffering nation,” he said, adding that “all those around Tinubu yesterday (Monday) knew the bitter truth but chose to fool Nigerians.”

Continuing, Momodu said: “One of them was heard in a viral video telling Tinubu to dance to the popular song ‘Buga’ by Kizz Daniel because “that’s what the youths want to see,” and lo and behold, Tinubu instantly transfigured into an accomplished choreographer.

“It is very sad, and unfortunate, that whenever we think Nigeria can never sink deeper into the abyss, something occurs that jolts us out of such assumptions and complacency.”

According to Momodu, incumbent President Muhammadu Buhari did a good job when he appeared at the same venue to engage with the global audience.

“I was with the President, Major General Muhammadu Buhari (retd.), the day he visited Chatham House seven years ago. He was solid and charismatic. He needed no one to prompt him. He answered questions eloquently and intelligently to the best of his abilities.

“That is what Tinubu was expected to accomplish yesterday (Monday). What he did instead was like inviting helpers to sit the Joint Admissions and Matriculation Board examination. It is horrifying to watch some respected intellectuals like El-Rufai and Fayemi as they struggled to window dress Tinubu on a much hallowed global stage,” he lamented.

Again, Umahi Defends IPOB, Says It Is Not Behind Attacks In South-East