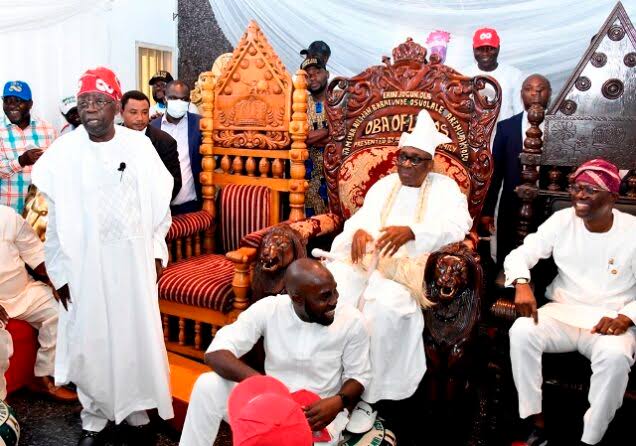 The presidential candidate of the All Progressives Congress (APC), Asiwaju Bola Tinubu, on Sunday returned to Lagos for the first time after winning the presidential ticket of the party.

The former Lagos State Governor, during a visit to the palace of the Oba of Lagos, Rilwan Akiolu straight from the airport, expressed his appreciation for the support of Governor Babajide Sanwo-Olu; his Deputy, Obafemi Hamzat; and the Lagos Oba.

Tinubu also urged the local government councillors and chairmen to mobilise people to vote during the upcoming 2023 general elections.

He said: “I want to say an open thank you to the Governor of Lagos State, Mr Babajide Sanwo-Olu, and his Deputy, Obafemi Hamzat, for their hard work and loyalty. Without a strong backup, you can’t have a successful leader and you cannot leave your home or office. I thank God for Lagos and the process of decision that brought these two men to lead the state. It feels happy to be back home.

“If you want to benefit from a president, you have to vote for him. It is our turn and this is not a joking matter, it is a matter of prayer and action. My charge goes to all the local government councillors and chairmen who have been working hard towards the development of the state, as it is now, we will use the votes delivered and those who registered to grade you.

“You can see how Ekiti State was filled with voters and the APC won, I pray God will help you achieve the same, to mobilise the people to vote.”

Akiolu, in his remarks, commended Tinubu’s zeal and prayed for his victory at the presidential election.

“Most people might tell you what he wants to hear, but I am not one of them. Tinubu has the support of the people and I always urge Governor Sanwo-Olu and his deputy, Hamzat to also work hard and God will continue to be with them.

“We are about to start a new journey now, and it will be beneficial. I want to tell all the youths that this administration will get them full employment and all will be well with all of us,” he said.

OPC Hits Fani-Kayode Below The Belt, Says He’s A Merchant Of Lies And Misinformation

Tinubu Vows Not To Retire From Politics Until He Becomes Nigeria’s...