Home Scoop ‘Their Stubbornness Will Collapse This Country’, Mbaka Reacts To Kanu’s Arrest 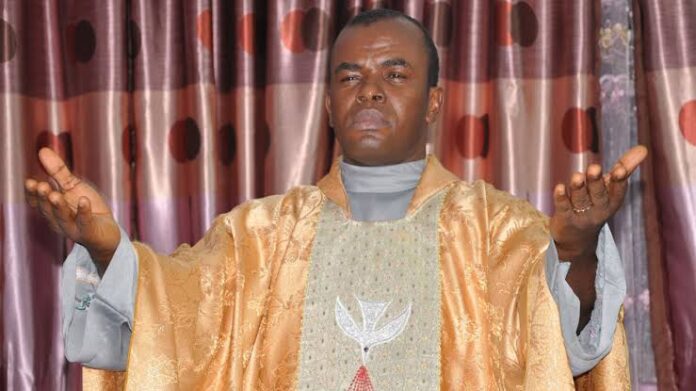 Controversial Spiritual Director of Adoration Ministry Enugu, Rev. Fr. Ejike Mbaka reacted to the re-arrest of the leader of the proscribed Indigenous People of Biafra (IPOB), Nnamdi Kanu, daring the Nigerian Government to do it’s worst.

NaijaNewsNow reports that the Attorney General and Minister of Justice, Abubakar Malami announced on Tuesday the re-arrest of Kanu, who jumped bail in 2019.

According to Malami, the IPOB leader was arrested by a combined team of Nigerian and foreign security agents in a coordinated interception.

Mbaka, in his reaction on Thursday, while daring the federal government to do its worst, said God will do His best.

He said: “Arrest is not the solution. There is agitation in the land, let the leaders listen. Their stubbornness one day will collapse this country.

“It is not a matter of referendum, the Israelites did not do any referendum before they left the land of Egypt.

“Who is fooling who? You don’t call a bulldog a bad name to kill it. People have senses. This is not between power and money, there is still God.

“For my beloved Nigerians and children of God, as far as God is still alive, in spite of all these, there is still hope.