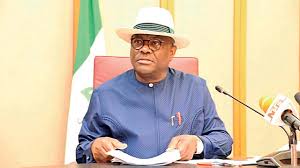 The Rivers State on Government on Wednesday declared that the Nigeria Police Force or men of the disbanded Special Anti-Robbery Squad involved in brutality and other human rights violations should compensate their victims.

The state government took the  decision after the five-man committee set up by Governor Nyesom Wike to formulate a draft White Paper on the recommendations of the Judicial Commission of Inquiry that investigated brutality and violation of fundamental human rights of citizens by the disbanded SARS in the state, submitted its report to the Executive Council at the Government House, Port Harcourt, on Wednesday.

The state Attorney General and Commissioner of Justice, Professor Zacchaeus Adangor (SAN), while briefing journalists after the council meeting, said the state should not bear the burden because the police was not part of the state government.

“As far as the issue of compensation is concerned, any compensation payable should be paid either by the police officer involved in those acts of brutality or by the Nigerian Police Force,” Adangor stated.

Nigeria’s AVM Yakubu Recieves US The ‘Legion Of Merit’ Award For...