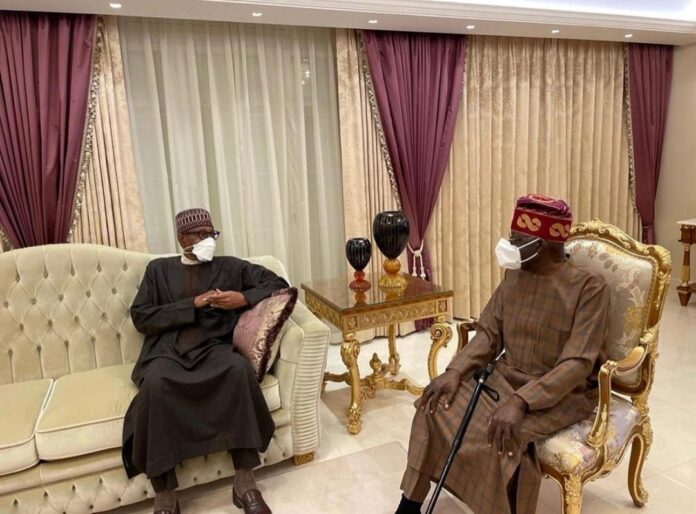 Nigerians, in the last one week have been bombarded with what has become Tinubu’s London photo-ops, as pictures of visits to him continue to trend on the internet, and off course, when it does happen, it becomes big news!

It will be recalled that the National Leader of the All Progressives Congress (APC) has been in the news for the past two weeks, with wild speculations surrounding his health. Reports had it that he was critically ill and on admission in a UK hospital. Some reports even said he was dead.

The speculations became rife when he was unusually absent during the ward congress of the ruling party. That alone, was capable of fuelling such rumours, as those who know the famous Jagaban of Borgu, will attest to the fact that he would, for no ordinary reason, miss leading his political camp from the frontlines on such an occasion.

As an acclaimed master political strategist, Tinubu has always remained on ground at any political contest, directing his well entrenched camp, especially in Lagos for either party or general electoral contest.

So, his absence, especially in a contest that is mostly likely to have some impact on who gets what at the party level in the primaries leading to 2023 general elections, raised more than enough dust.

A denial by his media aide, Tunde Rahman, via a statement two weeks ago, was not even enough to kill the speculations, as Nigerians, through experience, are now wiser than taking issued statements on their face value.

Though Rahman had maintained that his principal was not in a hospital abroad or had any “medical problem that would require hospitalisation”, Nigerians still needed something extra to be convinced.

Sanwo-Olu to the Rescue

To however convince Nigerians that his benefactor was indeed healthy and not in any way incapacitated, Lagos State Governor, Babajide Sanwo-Olu hopped on the next available plane to the British capital, London for a round of photo shoot with Tinubu.

Explaining the rationale for his trip and the pictures he shared in Lagos last week Wednesday, Sanwo-Olu said he made the trip and shared the photos with the APC leader to dispel the rumours about his ill-health.

“Yes, indeed, I am the one you saw in the picture that I took when I visited our leader in London just to dispel all of the rumours that were flying around that he was sick and hospitalised.

“I went to see things for myself. It is just to put the mind and heart of people to rest that there is nothing for us to worry about”, the governor said.

When asked when Tinubu will be returning to the country, Sanwo-Olu said: “A man has discretion as to decide when to go out of the country and when to return. It is his call. Is he coming here to do Governor’s work? Can’t you see the picture we took together? Picture doesn’t lie.”

Despite Governor Sanwo-Olu’s impressive and assuring publicity stunt on Tinubu, Kogi-born Ikeja Federal Constituency Representative at the National Assembly, James Abiodun Faleke, also shared pictures of himself with Tinubu in London during a visit last Tuesday.

Though Faleke’s shared pictures had far little impact on the proof of life and good health they were meant to portray, as he looked more like a star-struck fan angling to have emergency picture with his celebrity idol, it nevertheless came handy as another addition.

Tinubu with Daughter-in-law and Grand Children 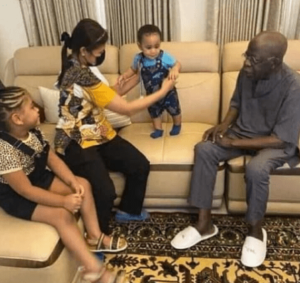 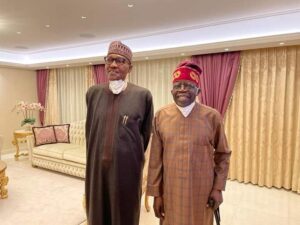 If there is any aspect of the London photo-ops that took many by surprise, it was that of President Muhammadu Buhari.

Though there are still some confusion on who among the two visited the other, the appearance of the pictures of President Buhari and Tinubu must have conclusively put to the rest speculations that the former Lagos State Governor was incapacitated. The pictures showed that even if he was sick, he has recovered and recuperating fast.

Why Tinubu Needed The Photo-Ops
Many Nigerians maybe wondering why the flurry of pictures of Bola Ahmed Tinubu with the aforementioned prominent individuals, including President Buhari and his grandchildren.

Why does he have to convince anybody that he is alive and indeed well and kicking?

To start with, Tinubu, in his many years at the top echelon of the Nigerian political ladder, understands the way Nigerians think. He also appreciates the power of perception.

He needed to assure his followers and his political opponents that he is still in charge by having the Lagos State governor make an emergency trip to London just to show the world that his boss is well and kicking.

Tinubu also perfectly understands the frustrations of Nigerians with the health challenges of President Buhari and how they may not be willing to have another president come 2023, whose performance in office will be limited by ill-health. So beyond proving that he is alive or healthy, Tinubu needed to convince Nigerians that he is fit and unencumbered by any health issue.

This became even more necessary and urgent since there had been various question marks hanging on his health status lately.

The Pictures with President Buhari also no doubt helped to dispel rumours of a rift between the two men, and off course insinuations that Buhari is not favourably disposed to having Tinubu succeed him.

To this end, if the narrative that it was the president that visited Tinubu in his London home is bought by Nigerians, then the Tinubu 2023 project may have just received a major boost, at least for the fact that the two men are still in good standing with each other, contrary to widespread speculations.