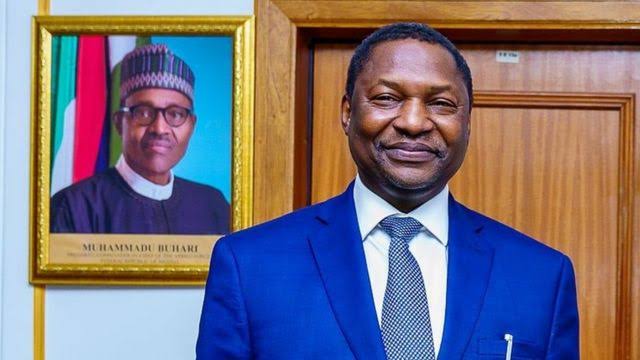 Mazi Nnamdi Kanu is no doubt a special human being and one that brings both the best and the worst out of people, even when it is against their wishes or clearly illegal.

The frenzy that attended the re-arrest of the leader of the Indigenous People of Biafra (IPOB) has shown that Kanu was never the miscreant, the hoodlum or the deranged rascal who spew rubbish at every pinch, just the way many of those who are opposed to his agitation and ideologies, most of which are questionable in any case, have made us to believe overtime.

The very powerful magic man Kanu has become to the Muhammadu Buhari’s administration came to the fore on Tuesday, when Nigeria’s Attorney General and and Minister of Justice, Abubakar Malami, a Senior Advocate of Nigeria and by right of office, Nigeria’s number one law officer, elevated one of languages spoken by one of the over 200 ethnic groups in the country to Nigeria’s official language, or as it is usually called, Lingua Franca!

In a viral video, still making the rounds on the internet, Malami chose Hausa language, spoken in parts of the North, and not the entire North, as the medium of choice to address a press conference, as a sitting federal minister, supposedly addressing the press and by extension, the nation, on an equally supposedly national issue, the ‘triumphant capture’ of Nigeria’s ‘number one enemy’ and the ‘architect’ of the all the woes of the most populous black nation on earth.

Malami, who was obviously in a celebration mood, threw caution to the winds, jettisoned the plurality of the country in terms of ethnicity, which has been a major source of division, and trampled on the Constitution of the Federal Republic of Nigeria, which he is responsible to uphold as the chief law officer of the country, in conducting his official business in a sectional language.

Constitutionally, the business of government, which Malami’s press briefing was, is to be conducted in the nation’s official language, which is English, but the Attorney General chose otherwise, thereby infringing the constitution.

For Malami, the ‘capture’, or the abduction of Kanu, as many have argued, was of more importance to Northerners, especially Hausas than the rest of Nigeria. Off course, it is, if one is to take cognisance of the N100 million bounty placed on the IPOB leader’s head by a coalition of Northern groups not too long ago. But Malami, by his obviously ill-advised choice, made it clear that, re-areesting Kanu was more of a northern agenda that it is Nigerian.

Malami’s action, has also further given strength to the myth that Nigeria belongs to the Hausa/Fulani and not all Nigerians. This is a myth or do we say, belief that forms part of the challenges and strongly fuelling the many crisis confronting the nation. How wise, many are wont to ask, is Malami, a senior minister and one of the closest to President Buhari, in fuelling an already tensed situation?

There are two possibilities for Malami’s action, one, is to call the bluff of other Nigerians and let them know for once that this country, Nigeria, belongs to the Hausa/Fulani and that others are merely tagging along! Off course, President Buhari has shown traces of this in abundance through his highly lopsided appointments and his handling of the farmers/herdsmen crisis and insistence on opening up grazing routes for herders.

Two, ‘capturing’ Kanu and bringing him back to Nigeria for trial was purely a Northern project and a part of the larger plot to subdue the South and silence every voice of dissent.

It may be hard, for any official of the Nigerian government to explain this away, as Malami, no doubt shot himself and the government he represents in the foot, exposing its disdain for the plurality of the country and the need for balancing.

It is also worthy of note, that despite the huge outcry this has generated, Malami or his spokesman has not deemed it to offer any explanation, because he just does not care!