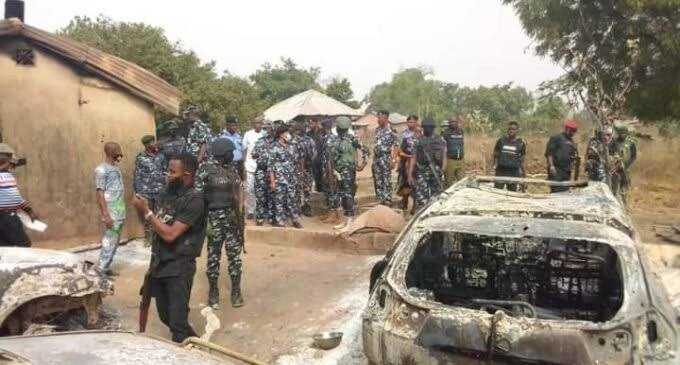 Igangan community in Ibarapa area of Oyo State is in the news again as suspected Fulani herdsmen reportedly attacked the community on Sunday morning, killing scores of residents.

According to reports, a petrol station and the palace of the traditional ruler was torched during the attack.

Video and pictures making the rounds on social media showed several bodies severely hacked reportedly in their homes while they were sleeping.

A voice narration on the phone is heard, saying “these are human bodies on the floor” and blaming the attack on Fulani militias.

Some of the residents, who survived the attack said the assailants were Fulani herders, believed to be carrying out a reprisal.

It would be recalled that the Sarkin Fulani Abdulkadir Salihu and his family, who were resident in Igangan, were forcibly removed from the town in January by aggrieved residents led by Yoruba activist, Sunday Adeyemo, also known as Sunday Igboho over allegations of enabling rape, murder and kidnapping in the area.

Confirming the attack, Oyo State Governor, Seyi Makinde, in a post on his Facebook page, said he had received the “shocking news” of the attack. He however failed to confirm if the attackers were Fulani.

A community leader and secretary of the farmers’ association in the area, Taiwo Adeagbo, whike confirming the attack, said support from the state was slow in coming, as police and Amotekun lines were off.

He however said help later came, including from agro rangers, police and hunters, adding that at least five of the assailants were killed.

Get Vaccinated Against COVID-19 Or Remain Stuck In Nigeria, Mustapha Tells Nigerians