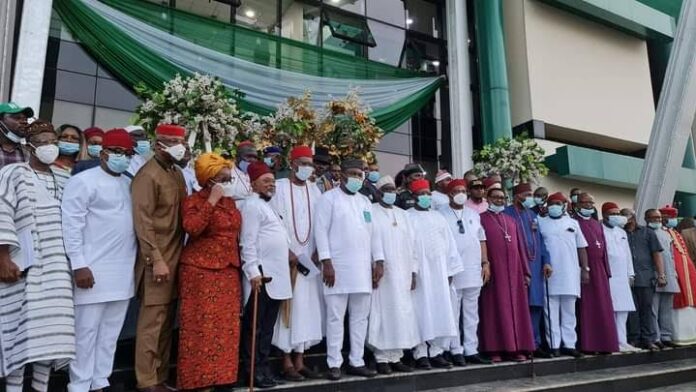 Leaders of the South-East geopolitical zone, on Saturday, laid to rest the question of the secession agitations in the zone, declaring that the agitators are not speaking for the zone.

The Igbo leaders, at a meeting in Enugu, also disowned the Movement for the Actualisation of Sovereign State of Biafra (MASSOB), the outlawed Indigenous People of Biafra (IPOB) and other pro-Biafra groups, saying the generality of the people of the geo-political zone prefer to remain in Nigeria, while also affirming their commitment to one united Nigeria guided by justice, equality of rights, fairness, love and respect for one another.

The Igbo leaders, comprising of present and past governors, ministers, National Assembly members, other members of the political class, religious leaders and traditional rulers from the zone, condemned the resort to violence by the secession agitators, declaring that “We do not support them. They do not speak for South-East.”

Ebonyi State Governor, who read a communique at the end of the four-hour meeting held in Enugu, said the meeting set up a committee to engage the agitators to stop and allow the elders of the Southeast to address their fears.

Speaking further, Umahi said similar committees were set up on “Agitation; engagement with other regions; those of our people in the North, South East, South-South and South West; IPOB, MASSOB, Youths and Market people, Okada and Keke; Diaspora; Advocacy; and Diplomatic engagement with Foreign Missions.”

The communiqué reads in part: “We the Southeast leaders condemn in totality the violent secessionist agitations in the Southeast. We firmly proclaim that we do not support them. They do not speak for Southeast.

“The impression that Southeast leaders are silent over the agitations of our youths for secession is not correct.

“Southeast governors, Ohanaeze Ndigbo president and our National Assembly members, our ministers and our leadership from Southeast, notable leaders from Southeast had come out publicly many times in the past to speak against such agitations.

“In order not to mismanage the unfortunate situation we found ourselves, Southeast leaders have set up a committee to engage such youths to stop and allow the elders of Southeast to address their fears.

“The meeting also set up a committee under Ohanaeze to articulate and address all burning issues to further meet amongst ourselves and further meet with the presidential team.

“We the Igbo reaffirm commitment to one united Nigeria under the platform of justice, equality of rights, fairness, love and respect for one another.”

The communiqué also noted the threats by some groups in some other regions against the people of South-East even as the leaders firmly promised to protect everyone either from the Southeast or anywhere living in the Southeast.

“We plead with the leaders of other regions to please note the threats against our people and protect them.

The meeting also had in attendance Governor Okezie Ikpeazu of Abia State while Governor Hope Uzodimma and his Anambra State counterpart, Chief Willie Obiano, were represented by their deputies, Prof. Placid Njoku and Nkem Okeke respectively.

Insecurity: Zamfara Reopens 45 Out Of 75 Shut Schools As Security...