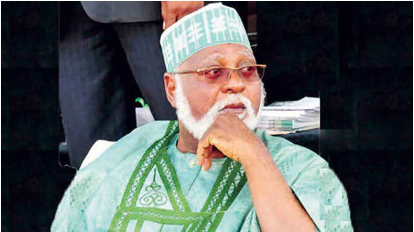 A former Head of State, Abdulsalam Abubakar on Wednesday said about six million weapons have been smuggled into the country, fuelling the current high level of insecurity in Nigeria.

Abubakar, who is also the Chairman of the National Peace Committee (NPC), stated this at a dialogue session of the committee with key stakeholders in Abuja.

Insisting that the proliferation of arms in the court has led to the degeneration in law and order, Abubakar argued that this has led to over 80,000 deaths and close to three million Internally Displaced Persons (IDPs).

According to him, the challenges facing the country were not only security in the narrow sense of the military definition but that they have assumed an all-encompassing nature.

He said: “The proliferation of all caliber of weapons not only in our sub-region in general and in Nigeria in particular is worrying. It is estimated that there are over 6 million of such weapons in circulation in the country. This certainly exacerbated the insecurity that led to over 80,000 deaths and close to 3 million IDPs.”

Buhari’s Govt ‘Is A Sactuary Of Corruption’ PDP Reacts To Alleged...

With 20m Followers, Davido Hits Another First As The Most Followed...