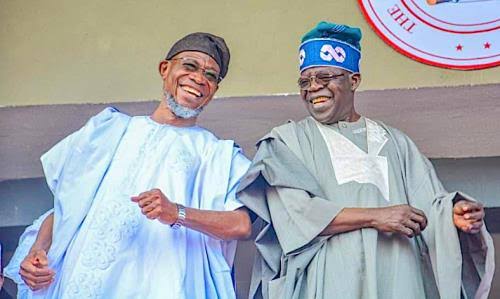 What started like a rumour, a whisper and as a matter of gossip, has eventually blown out and in such a messy manner and with no holding back approach; that is the frosty or putting more succinctly, the sour relationship between the National Leader of the All Progressives Congress (APC), Asiwaju Bola Ahmed Tinubu and the Minister of Interior, Rauf Aregbesola.

Before the duo went their different ways, they were seemingly inseparable, as Aregbesola was seen as Tinubu’s most trusted ally, someone who could be expected to queue behind him at all times.

Aside Aregbesola’s famed loyalty to Tinubu, he was also one the poster boys of the former Lagos State governor’s now supposedly legendary capacity to identify potentials and investment in people.

From just another struggling potential in the Alimosho area of Lagos State, Tinubu picked Aregbesola as campaign director in 1999, then Commissioner of Works for eight years before he was prodded to become the governor of Osun State, a project allegedly bankrolled by his boss in Lagos. From being governor for eight years, Aregbesola is the incumbent Minister of Interior, in a government Tinubu is reputed to have contributed immensely in bringing to power.

For many, Aregbesola would have remained a local champion in Alimosho, if Tinubu had not given him the opportunity to serve first as his campaign manager and the subsequent opportunities that came.

However, like every normal human being, a time comes when we crave for independence, be our own man and exert our new found influence, especially over our own space.

Cracks in the relationship are believed to have worsened when the minister failed to visit Tinubu in London when he was hospitalised for over three months for knee surgery. This is despite the fact that notable politicians in the country, including President Muhammadu Buhari, took turn to visit him in London.

What started as a fallout between a successor and his predecessor, that is between Aregbesola and Governor Gboyega Oyetola, has finally metamorphosed into an open confrontation, name calling and stubborn daring of Tinubu by his erstwhile man friday.

Speaking at a rally attended by his faction of the APC on Monday in Ijebu Jesa, Aregbesola practically took Tinubu to the cleaners, accusing him of turning himself into a god over his followers.

He also insisted that no man can terrify him, declaring that Oyetola won’t be reelected for a second term in office.

Aregbesola said: “Only God can terrify us, not man. Go and tell them wherever they are, we own this party. We own this Afenifere group. We own this people-loving group started by our patriarchs — (Obafemi) Awolowo and Bola Ige. This is Elder Akande’s group before he temporarily left us. This is our party. Stop calling yourself a factional group; you are not a faction; you are the authentic APC.

“We came back home to reposition our party to where it was meant to be because we followed the leading of our leader that we thought was a noble and reliable fellow. We followed him (Tinubu) dutifully with all sense of loyalty. Some people even thought that we were no longer Muslims because of how we cooperated with him. We dealt with him without treachery but we never knew he planned evil for us. We exalted him beyond his status and he turned himself to a god over us and we had sworn to ridicule anyone who compare himself to God. God has no competitor; He is enough to be God.

“We built this party on perseverance as well as sweat and blood. We lost a lot of people in this struggle but eventually, we came into government on November 27, 2010. We were in government for eight years and governed according to the measure of God’s grace, everybody in Osun enjoyed our tenure.

“When he (Tinubu) will hand over the present governor to me around July of 2018, he (Tinubu) declared that he (Oyetola) will succeed me and continue my good works. That was what he told me. He knows he has not done so if he is listening now and he has failed to call my successor to order.”

Speaking further, Aregbesola vowed Governor Oyetola will ve given the Ambode treatment in APC primary holding on Friday, insisting that if Tinubu and other APC members in Lagos had rejected Ambode, claiming he derailed from the original master plan, there was nothing wrong in dethroning Oyetola in Osun because he had derailed from the master plan too.

The latest outburst by Aregbesola, will no doubt have a rippling effect on the chances of the APC in the forthcoming governorship election in Osun as the party will be going into the election with a divided house, as any of the factions that loses out may cast protest votes against the eventual candidate of the party in the main election.

Aside the Osun election, this latest development may also take some shine off the presidential ambition of Tinubu, as more of his supposed disciples are beginning to fallout with him and speaking out. It will be recalled that the Special Adviser on Political Affairs to President Muhammadu Buhari, Senator Babafemi Ojudu had also distanced himself from Tinubu’s ambition and declaring that the former Lagos State Governor did not make him contrary to popular belief.

Yari warns Matawalle Against Defecting To APC, Says He will Lose His Seat