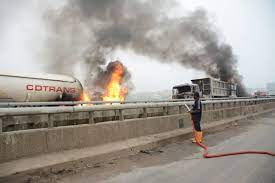 The Federal Road Safety Commission {FRSC} on Wednesday dispelled insinuations that the Otedola Bridge in Lagos is jinxed and that witches or ghosts are responsible for the frequent accidents on the bridge.

The Sector Commander of the FRSC Lagos State Command, Olusegun Ogungbemide, stated this during the Quarterly Stakeholders’ Meeting of the Lagos State Emergency Management Agency held at the Lagos Chambers of Commerce and Industries, insisting that reckless drivers are responsible for the crashes.

According to him, the frequent crashes recorded around the bridge are caused by reckless drivers who drive expired trucks.

Nigeria: It’s Better We Seperate Than Keep Slaughtering Each Other – Mailafia

Ohanaeze To IPOB: What Is Happening In Igboland Is Destruction, Not...