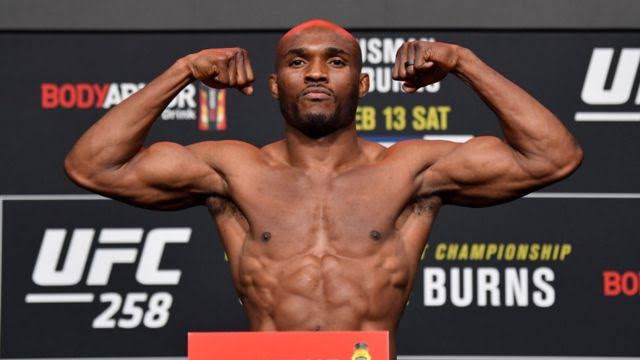 Ultimate Fighting Championship’s Welterweight Champion, Kamaru Usman has revealed that he feels a compelling need to represent Nigeria with pride after leaving the country for the United States as a youngster with his family.

Usman, nicknamed the Nigerian Nightmare, stated this on Wednesday when he visited the Edo State Government House, adding that he was happy to come back home and proud to visit the state where he hails from.

He said: “I am happy to be here and it’s a pleasure to be back home. Coming home has been at the back of my mind and I am proud to be from Auchi, Edo State. I have been in America for long and feel so compelled to represent the country; I feel compelled to carry on the pride.

“It’s been a while and I have been waiting to come back home and hopefully, will come home more frequently.”

The state Governor, Mr. Godwin Obaseki, who was represented at the reception by his deputy, Comrade Philip Shaibu, noted that Usman has made the state and country proud with his achievements, promising to collaborate with the welterweight champion to make champions out of Edo youths.

According to the governor, his administration would sustain reforms and programmes to ensure that more young people in the state thrive and realise their potentials.

He said: “We are happy today to receive you and are very proud to have you as our own. We are specifically happy to have you at a time that we are bringing back the sports’ glory of the state.

“We used the just concluded National Sports Festival to relaunch ourselves back into sports and your coming at this time is a boost to sports development in the state. Sports is good for our health and we will encourage the young ones to get more involved as they can become great through sports.

“You are a role model to the younger generation to emulate. We will continue to support people like you because you can be a promoter of sports for the state. You are someone to look up to in the state and nation at large.”

Anambra Extends Ban On Motorcycles To Nnewi, Ekwulobia Over Insecurity