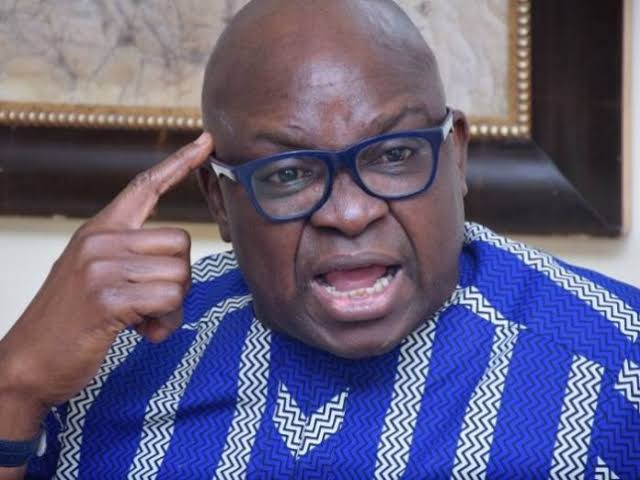 Peter Fayose, a former Governor of Ekiti State has dubbed President Muhammadu Buhari’s presidency as an employer and defender of Boko Haram terrorists and armed bandits, adding that the case of the Minister of Communication and Digital Economy, Isa Pantami’s case has further exposed the government’s hypocrisy and complicity.

Fayose was reacting to the defence offered the embattled minister over calls for his removal from office.

Pantami has been under fire to resign over his alleged support for terrorists groups such as Taliban and Al-Qaeda.

According to Fayose, it is painful that Nigeria is being governed by people who were at one time nominated as Boko Haram negotiators while their lieutenants are those who have openly kicked against military action against Boko Haram terrorists and rejected its categorisation as a terrorist organization.

He said: “The present situation of Nigeria, where the Presidency has become the employer and defender of Boko Haram terrorists and armed bandits is so appalling.

“The issue of Isa Pantami has further exposed the govt’s hypocrisy and complicity. So saddening and worrisome that the spokesmen of the president were the ones going from one media house to another to defend someone who openly supported terrorists.

“In the last 3 days, over 300 Nigerians have been killed across the country, with several others in captivity, and this is still not enough for President Buhari & his men to wear sackcloth and cover themselves with ashes. Rather, they are seen making merry as if nothing has happened.

“It is painful that Nigeria is being governed by people who were at one time nominated as Boko Haram negotiators while their lieutenants are those who have openly kicked against military action against Boko Haram terrorists & rejected its categorisation as a terrorist organization.

“With killings from North, South, East & West, it is certain that Nigerians must be impatient to send this APC govt packing in 2023, having made the mistake of bringing these clueless people in 2015. In fact, waiting bw now & 2023 will remain a pain in the heart of Nigerians.

“It is funny that today, if those running the affairs of the country are not telling us that armed bandits must be seen as innocent until proven guilty, they will be saying offence of forgery is more grievous than an open declaration of support for terrorists.

“Because of their inability to take decisive actions against these terrorists that they appear to have sympathy for, Nigeria is no longer safe for anyone to live in.

“Our roads have been taking over by terrorists while Nigerians, including traditional rulers, are now being abducted right inside their bedrooms.

“It is, therefore, my counsel to Nigerians that they should restrict their movements at this period and avoid travelling around the country.

“Those staying in isolated areas should also endeavour to move to where there are more people. It is my prayer that God will restore peace and normalcy to our country.”

EKITI APC Governorship Primary Runs Into A Hitch As Adeyeye, Bamidele, Others Withdraw

Middle-Aged LG Staff Hangs Self On Tree In Katsina