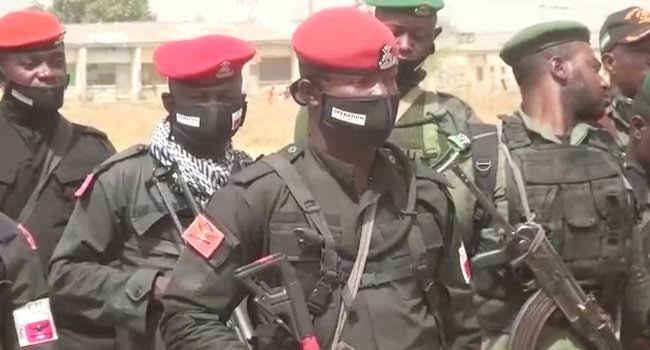 A 50-year-old leader of a group of bandits, Abdulahi Bummi, has been killed in a shootout with police operatives in Jigawa State.

Reports have it that the bandits’ leader was killed during a raid on bandits’ den in Gallu, Yankwashi Local Government Area of the state.

Also during the raid, jointly carried out by the Jigawa and Katsina states commands, the police operatives were said to have rescued a 65-year-old victim.

The spokesman for the Police in Katsina, SP Gambo Isah, while briefing newsmen at the Command headquarters in Katsina, said the victim, Hajiya Hasana Zubairu, was kidnapped on June 29, 2021, from her village, Rijiyar Tsamiya, Sandamu Local Government Area of Katsina State, adding that the kidnappers demanded a ransom of N500m from the victim’s family.

“When we got the report about the abduction, our OC anti-kidnap unit in collaboration with our colleagues in Jigawa State swung into action,” he said.

According to Isah, the leader of the bandits, Abdullahi Bummi, who engaged the police officers in a gun battle, attempted to escape with the victim on a motorbike but was over-powered and gunned down by the police, adding that search parties were still combing the forest with the view to apprehending other members of the gang.

You lied! Jang Reacts To Claim Northern PDP Govs Worked Against Jonathan In 2015

Associate Drags Sowore Over Grant Allegedly Applied For Her Without Her...