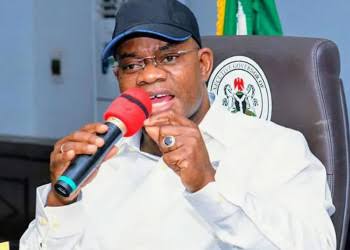 Kogi State Governor, Yahaya Bello has appealed to the Chief of Army Staff, Lt. General Ibrahim Atahiru to step up action and end the insecurity and violence in parts of the country.

The governor, who made the appeal during the groundbreaking ceremony for the Nigerian Army Officers Wives Association (NAOWA) Wellness Centre in Abuja on Monday, also called on the Federal Government to make adequate resources available to the armed forces for the welfare of their personnel so they can serve the nation better.

Admitting that there are several conflicts going on different parts of the country, Bello said he believed that the Nigerian armed forces were not weak but strong, capable, and able.

He said: “Please end this thing now, help to resolve this problem and deal decisively with the criminals who take arms against the state. Let our men in uniform be safe and secure, finish the job and return to their wives and children.

“I want to sincerely appreciate the good works that you have started so far and we will continue to support you and give you all the necessary encouragement,” Bello said.