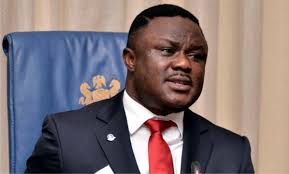 The Peoples Democratic Party (PDP) has reacted to the defection of Governor Ben Ayade of Cross River State, wishing him well in his new political sojourn.

Ayade announced his defection to the All Progressives Congress (APC) on Thursday during a closed door meeting with six governors of the APC at the Governor’s Office, Calabar, the state capital.

According to Ayade, he defected because of the need to align Cross River with the government at the centre so as to enhance the state’s fortunes.

The spokesman for the PDP, Kola Ologbondiyan, while reacting on behalf of the party, wished the governor well in his future endeavours and urging the members in the state to ensure that all party structure in the state remains intact.

“Our party calls on all critical stakeholders and teeming members of our party in Cross River to immediately pull together and ensure that all structure of our party in the state remains intact.

“The PDP wishes Governor Ayade well in his new political sojourn as well as in his future endeavours,” the statement read.

No Extension Of Deadline For Nomination Of Gov, Assembly Candidates, INEC Warns Parties