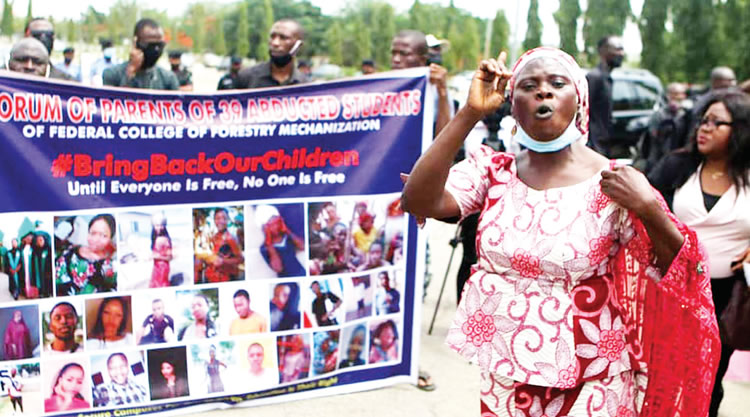 Parents of the students abducted at the Federal College of Forestry Mechanization, Afaka, Kaduna and the school’s students union, on Tuesday protested at the gate of the National Assembly, seeking the intervention of the federal lawmakers.

Led by one Abdulahi Usman, the protesters told journalists they wanted the lawmakers to prevail on security agencies to rescue their children.

Usman said partly: “Now, they have spent 55 days in captivity and we are still counting. There is no hope. Kaduna State Government said they cannot do anything. Even the Ministry of Environment, which supervises the team, is not doing anything.”

Also, one of the parents of the kidnapped students, Rabbi Zacharia Maggaji said: “Please, I want to talk to my son; he is the only person I have. It is me that has been training him. I don’t have any husband. I want to see my son; let the government help me.”

In response to the protest, the House of Representatives said it will be meeting with the Kaduna State Government on how to rescue the remaining 29 students.

It will be recalled that 10 of the students, who were abducted on March 11, 2021, were released by their abductors, leaving 29 still in captivity.

About 30 minutes into the plenary on Tuesday, the Speaker, Femi Gbajabiamila asked the Security Committee to go and address the protesters.

When the delegation led by Hon Babajimi Benson, Chairman, Defence Committee returned about 45 minutes after, the Speaker asked for feedback.

Benson said: “They (parents) feel that the Nigerian state has abandoned them. They have not eaten for two days; they all wore black, they don’t have hope. The only hope they have is the parliament.

“They have sent us to you, Mr Speaker. They have asked us to please, plead with you to ensure that their plights over their missing kids are immediately addressed. Their kids have been missing for 55 days.

“They were also so concerned that in their depression, they also asked that we speak on behalf of the kids that were abducted from Greenfield University as well.”

While responding, Gbajabiamila said: “The special committee, in the meantime, will look into it and liaise with all relevant authorities, including the state government in Kaduna, on how to deal with this matter.”

Onnoghen Finally Opens Up, Says He Was Removed Because Of A Rumoured Meeting With...