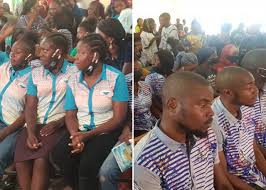 According to one of the freed students, Pamela Ibrahim, the bandits told them shortly before their release that their grouse was with government and that they will unleash hell on Kaduna State except government sort things out with them.

Ibrahim, who stated this while narrating her experience in captivity, said: “Before they released us, the kidnappers told us that they didn’t have anything against us (students). They said they kidnapped us because they needed the government to settle things with them and that they also wanted to be educated like other Nigerians. They need work and houses too.

“They said if the government doesn’t settle with them, they would continue to make sure that Kaduna State is unsafe. They said they meant it. Some of them are Nigerians, others are foreigners. They spoke mainly Fulani (language) and Hausa.

“There was an old man among them who prevented others from harassing us and anytime he was not around, we were beaten and insulted.”

NaijaNewsNow reports that 39 students of the college were abducted from the school in a night raid. 10 of the students were however released in two batches before the remaining were freed after 56 days in the custody of the bandits.

Violence, Terrorism Are Not Unique To Nigeria, Presidency Says, Claims Buhari Is Worried