Home Politricks Orji Kalu: Another ‘Unwilling’ President In The Making? 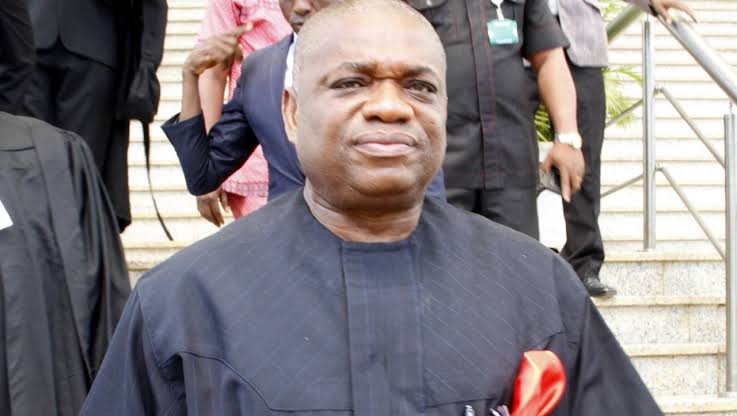 The Senate Majority Leader, Senator Orji Uzor Kalu on Sunday said he is not interested in becoming the next President of Nigeria. He was however quick to add that he would be willing to take up the role of President of he is called upon to do so.

Kalu, who many consider to be one of the presidential hopefuls from the South-East geopolitical zone of the country, disclosed this during an interview with Channels Television on Sunday.

He said: “I am not having that kind of ambition. But if I am given, why not? I can take it.”

The former Abia State Governor was reacting to prophecies from some clergymen that he will be Nigeria’s next president, insisting that he does not believe in such prophecies because of his religious belief.

“I am a Catholic. In the Catholic church, we don’t see visions. Well, if visions are being seen, and people say this and that, if it is the will of God that I will become president, why not? I am very capable mentally and otherwise to do whatever Nigerian people want me to do but not through prophecy”, Kalu said.

Kalu’s position in the interview with Channels Television however run contrary to his previous statements, as he has shown in time past that he was interested in becoming Nigeria’s president.

It would be recalled that when a Federal High Court sentenced him to jail for fraud related charges, Kalu made a statement many considered to be pregnant with meaning.

For many, Kalu, for that statement, meant to say he was sentenced solely because of his interest in contesting for the presidency in 2023 and had to be cleared off to jail to stop him.

It would be recalled also that on the 31 August, 2020, Kalu reinstated his interest in the presidency shortly after returning from jail, putting a caveat, if he is wanted.

He said: “I am still in the Senate, and I will seek reelection into the senate but if our people want me to serve as President I will not hesitate. Zoning is not a constitutional matter in APC, any person can contest any post in APC.”

The recent posture of the former governor, though still suggests that he is indirectly interested, is a sharp departure from his former definite comments and statements on his interest in the presidency.

His current position suggests that something must have given way since his sojourn to and from prison, making him more of an unwilling president in the mould of late President Umaru Yaradua, who was practically forced into the race and made President against his will by former President Olusegun Obasanjo.

The experience with Yaradua has however shown that Nigeria does not need an unwilling president again but someone, not just with a definite ambition but a clear cut vision and agenda for the transformation of the country. Someone with passion for the office, the development of Nigeria and the wellbeing of its people.

If Senator Orji Kalu is waiting for ‘our people’ to beckon on him to contest and be their president, he may just be disappointed as Nigerians seem to have gone past that era of imposing an unwilling candidate of the nation.