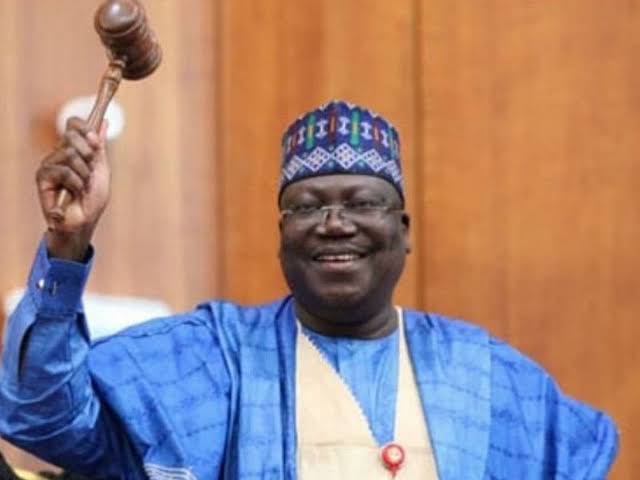 The news of the rejection of the nomination of the Special Assistant to President Muhammadu Buhari on Social Media, Lauretta Onochie as a National Commissioner of the Independent National Electoral Commission (INEC), was received with sigh of relief by many Nigerians.

The reaction of Nigerians to the news, which was more of a hard earned victory, did not come as a surprise, going by the many voices that spoke against her nomination and impending confirmation, or so it seemed.

For many Nigerians, nominating Onochie, an obviously partisan individual and a known diehard Buhari apologist, for a job that requires a non-partisan candidate, was a step taken too far against constitutionalism.

The outcry against Onochie’s potential confirmation was defeaning, but with an Ahmed Lawan led Senate, hope was almost lost, as the current Senate, has over time proven to be grossly anti-people and overtly pro-Buhari.

The tension real, and off course, it was not misplaced, as the 9th Senate, through Lawan, had ‘vowed’ to approve whatever comes from President Buhari in the spirit of ‘executive-legislature harmony and cooperation’.

However, the Senate in its wisdom, rejected Onochie’s nomination, and Nigerians, including the main opposition party,the Peoples Democratic Party (PDP), went to town jubilating, believing what has happened is a true victory, while unknown to them, it was really a victory laid with landmines!

NaijaNewsNow had reported that the Senate Committee chairman on INEC, Senator Kabiru Gaya, while presenting the report of his committee on the screening of Lauretta Onochie, said her nomination was rejected based on the fact that it violated the principles of Federal Character as espoused in the Constitution of the Federal Republic of Nigeria, and not because of her partisan status.

Senator Gaya said: “In the case of Ms. Lauretta Onochie’s, having studied her curriculum vitae and other relevant documents, followed by exhaustive interaction around the petitions against her nomination which she responded to accordingly, including attesting that she is not a registered member of any political party.”

Speaking further, the Senator said the Committee bound by the provisions of Section 14(3) of the 1999 Constitution of the Federal Republic of Nigeria (as Amendment) on Federal Character Principle, refused to recommend Onochie for confirmation.

“Therefore, based on the provisions of Section 14(3) of the 1999 Constitution of the Federal Republic of Nigeria (as Amended) on Federal Character Principle as earlier stated, and in order for the Committee and the Senate to achieve fairness to other states and political zones in the country, the committee is unable to recommend Ms. Lauretta Onochie for confirmation as a National Electoral Commissioner for the Independent National Electoral Commission,” he explained.

According to Gaya, INEC already has a serving National Commissioner appointed from Delta, the same state Onochie was nominated to represent.

The Senate INEC Committee chair however insisted that Onochie is qualified to be INEC National Commissioner despite her obvious partisanship but was only refused confirmation because of May Agbamuche-Mbu, who is currently occupying Delta State’s slot at the electoral body.

“That one is no issue because she clearly told us she’s not a card-carrying member and nobody submitted a petition with a copy of her party card.

“On that basis, we have to agree that she’s not a card-carrying member.

“Therefore, she’s qualified to be electoral commissioner; but because of the issue of federal character, she had to be disqualified,” Gaya said.

That technicality will stop being a problem when the tenure of May Agbamuche-Mbu, Delta’s current representative, expires this December.

As it stands, the Senate has only pulled a wool over the faces of Nigerians, who vigorously campaigned against the confirmation of Onochie, postponing the evil day, when an obvious partisan person, an uncouth and controversial one, will be foisted on Nigerians and INEC.

It would have been a wonder, an unexpected one at that, if the Senate had rejected Onochie based on her partisanship and loyalty to President Buhari. This is because the Lawan-led Senate has over time proven to be anti-people and pro-Buhari.

The Senate under Ahmed, from all indications, lack the balls to look Buhari in the face and tell him “Onochie cannot be INEC Commissioner because she is loyal to you and a member of your party.”

The Senate has only technically put off Onochie’s nomination, waiting patiently for December when the tenure of May Agbamuche-mbu will expire and Buhari renominates her; which is a given, because he has done that twice.

The trick by the Senate, which many Nigerians fell for, becomes even more glaring, knowing that the same Senate never had any problem approving the obviously skewed appointments by Buhari, especially as it concerns heads of security agencies and other high profile appointments. The Senate never raised objections citing Federal Character Principle in confirming people from the same section of the country to head sensitive positions. This clearly shows that the Senate is only being clever by half!

As it stands, Nigerians, including the opposition PDP, will have to wait to fight another day, knowing that President Buhari will most likely renominate his beloved Onochie, his known attack dog, come December 2021.

Like CBN, ECOWAS Commission Issues Security Advisory To Its Staff

Nigeria’s Unity Is On Trial, CAN Says, Wonders Why Brutal Force...