Home Scoop ‘Only A Moron Will Equate Money To Self-Determination’, IPOB Replies FG 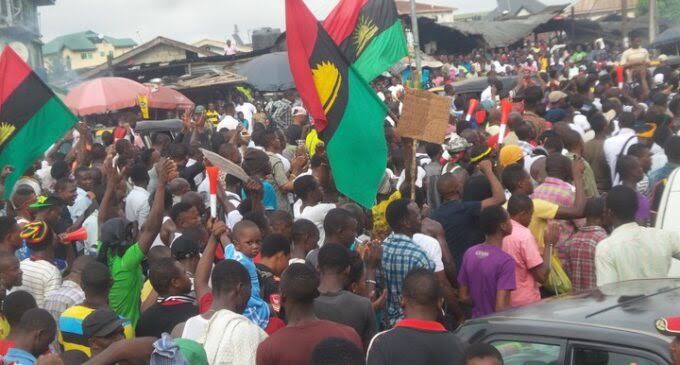 The proscribed Indigenous People of Biafra (IPOB), has said that the agitation for self-determination in the country can only be equated to money by morons.

The proscribed secessionist group was reacting to claims by the Senior Special Assistant to the President on Media and Publicity, Garba Shehu, that the refusal of President Muhammadu Buhari to dole out money to certain individuals is the reason for the current agitations.

The Prediency, in the statement by Shehu, on Wednesday, said members of separatist groups like Biafra and Oduduwa Republics were only agitating for self determination because the Federal Government under President Muhammadu Buhari had refused to share money with them.

“President Buhari will pay no one. He is not going to pay and now it is clear that having ignored all of that, unreasonable opinions are coming from those states and from those regions,” Shehu said.

However, IPOB, in a statement by its spokesman, Emma Powerful on Friday, challenged the Federal Government to prove its allegation that some of its members have been asking for money from government.

The group challenged the government to prove its case by “publishing names of those that requested money to drop the quest for Biafran restoration.”

The statement reads: “The attention of the Indigenous People of Biafra (IPOB), under the command and leadership of our great and indomitable leader, Mazi Nnamdi Kanu, has been drawn to the ranting, derogatory, irresponsible and highly provocative remarks by the Presidency through Garba Shehu that the renewed agitation for self determination in the South East was because the federal government had refused to share money to those behind the agitation.

“We, therefore, challenge Shehu to mention those the federal government has been paying in the South East to drop the agitation for self determination.

“If he fails to disclose the identities of the beneficiaries and evidence of such payments, we will take it to be one of the shameless lies which have become the trademark of the Muhammadu Buhari-led federal government.

“Without speaking for other proponents of self determination, we know that the federal government of Nigeria has been making frantic but fruitless efforts to induce the leadership of IPOB with money to possibly drop the quest for Biafran restoration.

“Federal government has severally but without success, attempted to buy over our leader, Mazi Nnamdi Kanu, making him some irresistible offers.

“But if there were any parading themselves as Igbo leaders that acepted their offer, we can assure them that such cannot peneterate IPOB. IPOB is not, has never been, and will never be interested in the crumbs from federal government of Nigeria.

“We also wish to remind the Presidency that only a certified and unconscionable moron will ever equate money to the motive behind the growing agitation for self determination across Nigeria.

“If money is what we want, we know what to do to get more money. How many times in the past did our leader reject your financial inducements?

“If you know those people that asked Buhari for money, we are begging you to please publish their names.

“Our aim for Biafra agitation is freedom! We are tired of sharing a geographical space with terrorists.

“Nothing can change our resolve to free Biafra from Nigeria. No amount of propaganda by government can make us change our mind.”

Man In Search Of Cow To Buy Killed In Anambra By...