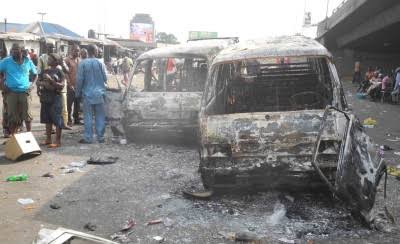 The Ondo State chapter of the National Union of Road Transport Workers, on Tuesday morning, engaged in a free for all fight at the Oja Oba area of Akure, the state capital.

The renewed hostility is coming barely 48 hours after factions of the union engaged each another in a fight at the Owode area of the state, leading to injuries sustained by many.

According to reports, residents and traders along the popular Oba Adesida Road had to run for their lives while business activities were paralysed when the armed unionists attacked each other on Tuesday morning.

Though the cause of the fracas is yet unknown, several vehicles were vandalised in the process.

Manufacturers Of Fake Drinks Arrested By The Police In Rivers

Race For Vacant Alaafin Stool Hots Up With Names Of 86...