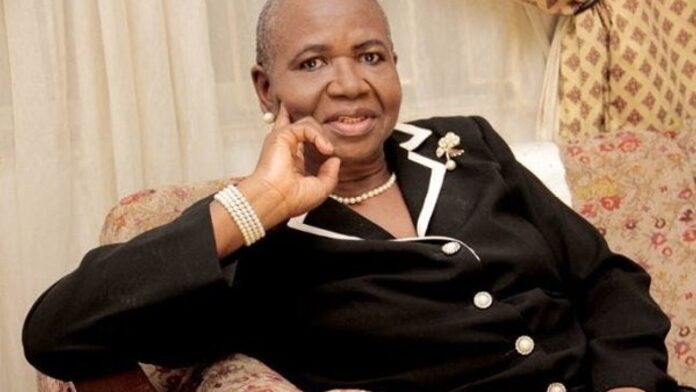 Daughter of a former Ondo State Governor, Adekunle Ajasin, Mrs Jumoke Anifowose has been expelled by the Ondo State chapter of the All Progressives Congress {APC} over alleged anti-party activities.

Anifowose and Adojutelegan had approached the court to challenge the candidacy of Governor Rotimi Akeredolu in the last governorship primary of the party held in 2019 and lost the legal battle at the Supreme Court.

The spokesman for the party in the state, Mr. Alex Kelejaiye disclosed this while addressing journalists on Friday in Akure, adding that the action of the party on the duo was based on the report of the fact-finding committee set up by the party to look into the allegation.

He said: “Sometime in January, leaders of APC in Igboroko 1, Ward 2, Owo Local Government Area outlined some anti-party allegations against one of its leaders, and indeed a state leader, Chief (Mrs) Jumoke Anifowose-Ajasin. The ward suspended Mrs. Anifowose after investigation, expectedly, and communicated the decision to the local government secretariat.

“On receipt of the letter of suspension, the leadership of the local government did thorough checks on the actions and decision of the ward and, convinced of the propriety of the decision, endorsed the suspension of Mrs. Anifowose, and did communicate the development to the state secretariat.

“We also received series of complaints and anti-party allegations against Mr. Nathaniel Adojutelegan from the leaders in Arigidi Iye Ward 1, Akoko North West Local Government, and that he has been suspended.

“As a lawful and responsible organisation, the State Working Committee deliberated on the allegations and set up a fact-finding committee in line with Article 21 of the Party, to dig into series of allegations against Mrs. Anifowose and Mr. Nathaniel Adojutelegan.

“At the party’s State Executive Committee yesterday, June 3, 2021, and on the strength of the report of the disciplinary committee early set up, the Ondo State APC resolved that Mrs. Jumoke Anifowose-Ajasin and Mr. Nathaniel Adojutelegan be suspended and expelled forthwith from the chapter. The resolution is being communicated to the National Secretariat.”

2023: Soludo Boasts Of APGA’s Chances, Says Our Victory Will Be Resounding

God Will Kill Families Of Anyone Who Does Not Support Yoruba...