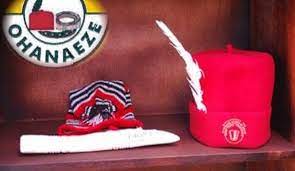 The Ohanaeze Ndigbo has alleged that infiltrators and powerful elements are behind the increasing attacks on security agents and their facilities in the South-East.

The apex Igbo sociocultural group, also said the attacks may be part of a pre-planned invasion of the region by the powerful elements, insisting that the signature of the attackers does not match known attacks by locals.

The group stated this in a communiqué issued on Wednesday, and jointly signed by its President General, Prof.George Obiozor and the Secretary-General, Ambassador Okey Emuchay after an emergency caucus meeting of the group in Enugu.

The Ohanaeze Ndigbo also called on the Federal government to ensure thorough investigations into these crimes in order to allay the fears of the populace.

The Communiqué read in part: “In the recent past, there has been a spate of violent attacks on some institutions in South East of Nigeria; examples include the Correctional Center, State Police Headquarters and the country home of the Governor of Imo State all in Imo State.

“These attacks were clinically conducted by the perpetrators and to this extent do not bear the usual and known signature of local operators.

“Such dastardly acts are not in Igbo character. Ohanaeze urges the security agencies to trace the perpetrators of this heinous crime and bring them to book.

“Ohanaeze reviewed the incidents of criminalities that have occurred in South East of Nigeria in the recent past and concludes that going by the sophistication and capacity of the likely perpetrators that some powerful elements or groups could be deliberately orchestrating violence to justify a preplanned and predetermined invasion of South East of Nigeria.

“Ohanaeze, therefore, requests the Federal Government to investigate seriously the nature and sophistication of the crimes that are taking place in South East of Nigeria in the interest of all.”

Clamour For Igbo President In 2023 Is Reason For Rising Violence...

Osun APC Orders Aspirants For 2023 To Stop Campaigns, Focus On...

Davido’s Father Is One Of My Biggest Inspirations, Mr. Macaroni Says