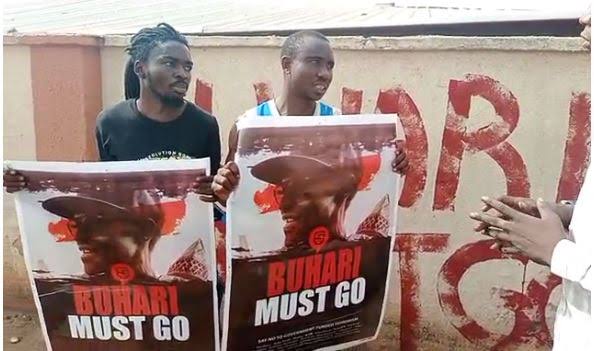 The police in Kogi State have reportedly arraigned two men, Anene Victor and Emmanuel Larry, who protested against President Muhammadu Buhari in Lokoja before a Magistrate in his office, where he also signed their remand order.

It would be recalled that Victor and Larry had been seen in a viral video on Monday holding “Buhari must go” posters. The two were seen being flogged by youths for protesting.

According to a report by TheCable, on Friday, the lawyer to the protesters, Benjamin Omeiza, revealed that Anene and Larry were arraigned on Tuesday at the Magistrates’ Court 1, Lokoja, on charges bordering on treasonable felony and inciting public unrest.

Omeiza further revealed that the magistrate signed a remand order in his office because of the strike action by the Judicial Staff Union of Nigeria JUSUN).

He said: “One of the police officers at the A Division reliably informed me that they were taken and arraigned before a magistrate in his office who signed a remand warrant.

“At a time when the judiciary is on strike, a magistrate is entertaining a case he has no jurisdiction over and then remanding suspects over a bailable allegation.”

According to the lawyer, he made efforts to see the Kogi State commissioner of police but was later directed to see the officer in charge of the legal department at the command headquarters.

“I registered my grievances before her and she confirmed that they were remanded on Tuesday,” Omeiza said.

Okotie Ready With Interim Government Proposal, To Present It To Buhari

Nigeria Is Not A Productive State, Obi Laments As He Identifies The Nation’s Problem