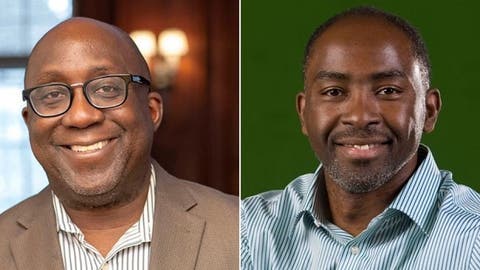 Two Nigerian-American engineers, Oyekunke Olukotun and Oluwole Soboyejo have been elected into the prestigious US National Academy of Engineering, in recognition of their trail blazing achievements in the field of engineering.

Related by their election, the United States Mission in Nigeria took to their Facebook page to celebrate them with a congratulatory message.

“We congratulate Nigerian-Americans Oyekunle Olukotun and Oluwole Soboyejo for their election to the prestigious National Academy of Engineering of the United States of America.

“They were elected based on their outstanding contributions to engineering literature, pioneering new fields of technology, and implementing innovative approaches to engineering education. Kudos!” the US Mission wrote.

Known as the “father of the multi-core processor”, Olukotun is the leader of the Stanford Hydra Chip Multiprocessor research project, has been credited with the design of the first general-purpose multi-core CPU, innovating single-chip multiprocessor and multi-threaded processor design.

On his part, Soboyejo, the son of Professor Alfred Sobojeyo of The Ohio State University and Anthonia Soboyejo, is a material scientist with research interest that focuses on biomaterials and the use of nanoparticles for the detection and treatment of disease, the mechanical properties of materials, and the use of materials science to promote global development.

Soboyejo was born in Palo Alto, California, USA in 1964. He however moved to Nigeria with his family in 1965, before leaving for London to attend King’s College where he obtained a BS Mechanical Engineering in 1985 and Churchill College, Cambridge (PhD Materials Science and Metallurgy, 1988).

He returned to the United States in 1988 to become a research scientist at The McDonnell Douglas Research Labs in St. Louis, MO. In 1992, he worked briefly as a Principal Research Engineer at the Edison Welding Institute before joining the engineering faculty of The Ohio State University in Columbus, OH.

You Are Unknown To APC, Presidency Replies Yakasai For Claiming Buhari Is Not Supporting...