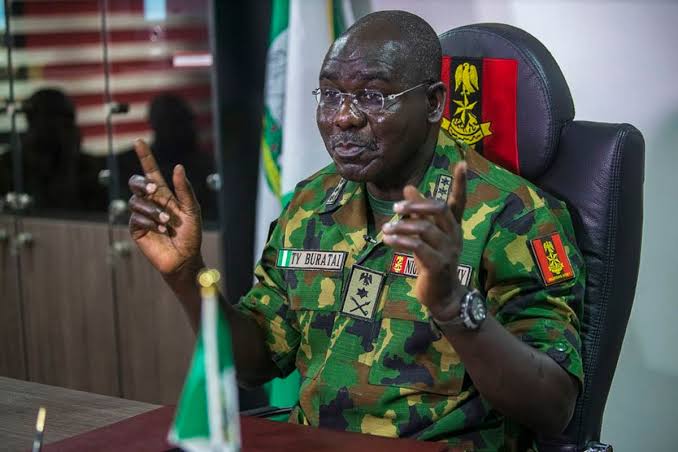 The Immediate past Chief of Army Staff, Lt. General Tukur Buratai (rtd), on Sunday said the $1 billion meant for arms purchase under his and other immediate service chiefs is not missing.

Buratai, who stated this on Sunday through a statement from his lawyer, Osuagwu Ugochukwu, was reacting to conflicting comments on the issue by the National Security Adviser (NSA) Major General Babagana Monguno (rtd).

NaijaNewsNow had reported that Monguno, in an interview with the BBC on Friday, alleged that the money meant for arms purchase were missing under the immediate past service chiefs. A statement from his office later on Friday however denied accusing the former service chiefs of pilfering the arms fund, claiming he was qouted out of context.

Buratai, in his reaction on Sunday, however called on Nigerians to disregard the allegation, while asking those interested in finding out what transpired to visit the Ministry of Defence.

“My attention has been drawn to an interview granted BBC by National Security Adviser (NSA), Rtd Major General Babagana Monguno, wherein he was alleged to have accused former service chiefs of filtering arms fund away. I can confirm that Lt. General Buratai and other ex-service chiefs were never mentioned in the interview and neither was any arms fund missing under the stewardship of Lt. Gen T.Y. Buratai.

“Interestingly, NSA Babagana Monguno has denied making such accusations. We, therefore, urge members of the public to discountenance any such misquoted narrative suggesting sleaze on the integrity of Rtd Lt Gen T.Y. Buratai. Anyone interested in knowing how arms were procured by the ex-service chiefs and particularly Lt Gen T.Y. Buratai should channel such request for information to the Ministry of Defence”, the statement read.

Nothing Will Stop North From Fielding Presidential Candidate in 2023 – CNG