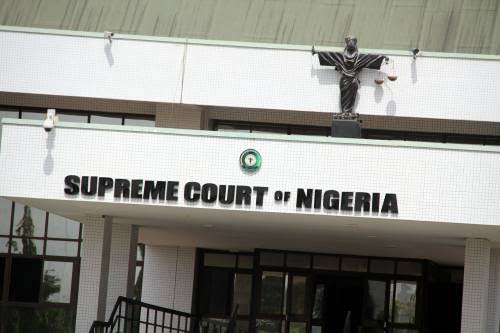 The Supreme Court of Nigeria has ruled that female Muslim students in Lagos State Government owned schools can wear hijab.

The court gave the judgment in an appeal – Lagos State Govt. and Ors V. Asiyat AbdulKareem with suit number SC/910/16 – on Friday in Abuja.

The court also dismissed an appeal by the Lagos State Government and upheld the earlier judgement of the Court of Appeal which held that the ban on hijab was discriminatory against Muslim students in the state.

IIn a spilt decision, Justice Kudirat Kekere-Ekun held that the ban on hijab was discriminatory against Muslim students in Lagos State in the 80-page lead judgment.

The news of the judgment was received with wild jubilation, with the Amir (President) of the Muslim Students’ Society of Nigeria, Lagos State Area Unit, Miftahudeen Thanni, and other members of the organisation seen shouting “God is great”.

The court held that the ban violated the Muslim students’ rights to freedom of thought, conscience, religion, the dignity of human persons and freedom from discrimination guaranteed by the 1999 Constitution.

The Lagos State Government had banned the use of the hijab, arguing that it was not part of the approved school uniform for students.

In reaction to the ban, Muslim students filed a suit on May 27, 2015, seeking redress and asking the court to declare the ban as a violation of their rights to freedom of thought, religion and education.

He also warned teachers and government officials against harassment of female Muslim students, urging that the Supreme Court judgement should put a stop to the “undue” punishment of students willing to wear the hijab.

According to him, “the judgement did not make the use of hijab mandatory. What the judgement means is that students who are willing to use the hijab can use it without being harassed or punished.”

Thanni, however, assured the state government and residents of peaceful co-existence and that Muslim students won’t abuse the judgement, adding the judgement has deepened the students’ and Nigerians’ confidence in the judiciary.

He said: “We are a law-abiding organisation and we will continue to uphold the law of the land. We applaud the judgement. The position of the law is very clear on the subject matter. This matter once more assures us that all hope is not lost on having a modest society.

“The government should not be waging war against youths who choose to cover their nakedness while encouraging those who walk naked and engage in illicit acts in public.

“It gladdens to see that the injunction which the LASG is using as a basis to deny the rights of Muslim students has been decided by the apex court.

You Are A Slanderous Woman! Battle For Fani-Kayode’s Soul Continues As...