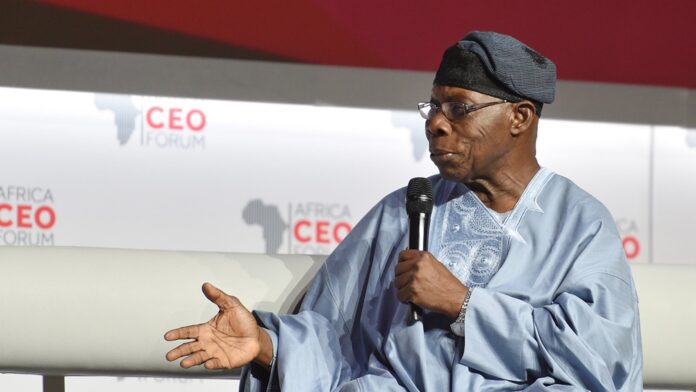 The Special Adviser to the President on Media and Publicity, Femi Adesina, has asked former President Olusegun Obasanjo to mind his utterances, declaring that he contributed to the current chaos in the country.

Adesina said this on Friday in an article titled, ‘Nigeria’s Unity And All The Iberiberism’.

Adesina wrote: “The sabre-rattling about Nigeria’s unity and the possibility of disintegration has got to the point of Iberiberism (an Igbo word which could mean stupidity). Some people have no other business than doomsday predictions of a crumbled, collapsed Nigeria, as if they actually fast and pray for that eventuality.

“When Chief Olusegun Obasanjo was President between 1999 and 2007, they predicted that he was going to be the last President of a united Nigeria. It didn’t happen. When Umaru Yar’Adua came, they said he was too sick to hold Nigeria together. The country stood.

“Under Goodluck Jonathan, they said the man was too weak, and different components of the country would soon say, ‘to your tents oh Israel.’ Nigeria survived. And for six years under Muhammadu Buhari, they have not changed their songs. The Somaliasation of Nigeria was on the way. The Fulanisation of the country would be the final death knell. But Nigeria lives. It trudges on from day to day, month to month, and will surely survive.”

According to the Presidential spokesman, though some people dwell on negativity, “some fathers of the land will not fold their hands and see Nigeria go down”.

“Fortunately, we have one of them as President now. The young Muhammadu Buhari spent 30 months in the frontlines as a young army officer, fighting the war of unity. And he has said it: we will not be around and watch Nigeria go down. Never. We will rather speak to insurrectionists in the language they understand.

“And what of Olusegun Obasanjo, a civil war hero. Despite all that he has contributed to the current upheavals by his actions and inactions, words and bile, he says it is idiotic to wish Nigeria disintegration now. Good. But let us put our money where our mouth is. Let Baba mind his thoughts, and his language,” the presidential spokesman added.

“Nigeria will survive. The polity will endure. And the component parts will live together in amity and brotherhood. Any other option is Iberiberism,” he concluded.

If Nigeria Does Not Need Help Against Terrorism, Ondo Needs It, Akeredolu Cries Out

One Inmate Dead, 12 Others Injured In Attempted Jailbreak In Port...