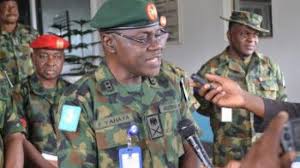 The Chief of Army Staff, Lieutenant General Faruk Yahaya, has ordered troops of the Nigerian Army to deal decisively with bandits and kidnappers threatening the security of the country.

The COAS gave the order on Wednesday during an operational tour of the Army Headquarters 1 Division in Kaduna State.

The Director of Army Public Relations, Onyema Nwachukwu, disclosed this in a statement on Thursday morning.

According to the statement, Yahaya, who was received and conducted round Forward Operational Bases Sabo Birnin and Rigassa by the General Officer Commanding 1 Division, Kabiru Mukhtar, charged the troops to be ingenious in their training and operational engagements.

The statement read in part: “Describing emerging security threats as real, the COAS directed the troops to decisively deal with bandits, kidnappers and other criminal elements threatening the security of the nation.

“He urged the troops to remain committed to ensuring security of lives and property of the citizenry, maintaining that it is crucial for officers and soldiers to always cultivate cordial civil-military relations with members of their host communities and the general public as critical stakeholders and catalyst for operational success.”

During the visit, the Army chief presented a brand new Toyota Hilux to the Regimental Sergeant Major of Headquarters 1 Division, Auwalu Taudo.

Real Madrid ‘No Longer Had Faith In Me’, Zidane Saya In Open Letter To...

Jonathan Reveals Some Of His Aides Abandoned Him After Losing 2015...

Not True! CNG Counters Mala Buni On Security Situation In The...