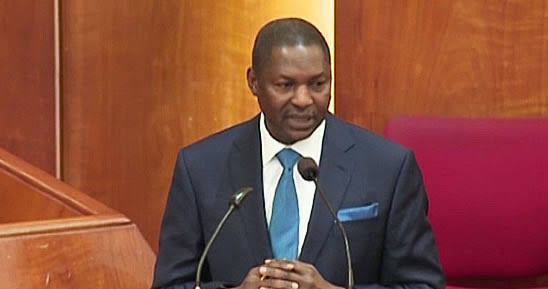 The Attorney-General of the Federation and Minister of Justice, Abubakar Malami, on Friday night, described as a national tragedy, the military air crash that led to the death of the Chief of Army Staff, Lieutenant General Ibrahim Attahiru.

According to Malami, the late Chief of Army Staff and members of his team were dedicated and patriotic Nigerians who had contributed to improving security in the country.

The minister stated this in a statement by his Special Assistant on Media and Public Relations, Dr Umar Gwandu on Friday, adding that the minister, who was attending one of the functions for his son’s wedding has elected to have the ceremony in a low key manner.

The statement read: “Malami received the news of the crash of the military aircraft in Kano while attending to guests in preparation for the wedding ceremony of his second son, Abiru Malami, billed for tomorrow.

“The minister said the late Army officer who died in active service to the nation will always be remembered as a selfless and patriotic Nigerian who is passionate in duty.

“Malami prayed Allah to grant eternal salvation for all that lost their lives in the air mishap.

“He also prayed that the family members have the fortitude to bear the loss.

“Malami, who thanked all the guests at the wedding ceremony, said the wedding Fatiha will be low keyed in view of the national tragedy and for strict observations to the laid down COVID-19 protocols and guidelines.

“He said many of the intended functions will be shelved to honour the deceased.”

Herdsmen Attacks: Its Your Problem, Buhari Passes The Buck To State Governors