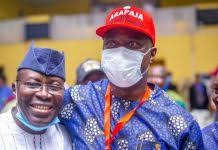 An ally of Oyo State Governor, Seyi Makinde, Dare Adeleke has applauded the emergence of a former Deputy Governor of Oyo State, Ambassador Taofeeq Arapaja as the Chairman of the Peoples Democratic Party in the South-West.

NaijaNewsNow reports that Arapaja, who was Governor Makinde’s candidate for the position, emerged winner of the keenly contested election at the South-West PDP congress held in Osogbo on Monday.

Adeleke, while reacting to Arapaja’s victory in a statement on Tuesday, said Arapaja is a breath of fresh air whose mantra has always been unity of the party.
“I am very hopeful that with the emergence of Ambassador Taofeeq Arapaja, the PDP South-West is on it’s way into greatness again. All through his tours prior to the election, Arapaja preached peace, reconciliation and unity. He is a man dedicated to those words and I am sure he will perform exceptionally as the new chairman, PDP, South West Zone”.

The PDP chieftain also praised Governor Makinde, whom he called a man with vision and foresight.

”I am full of thanks to His Excellency, Governor Seyi Makinde for his clarity of mind and vision to have brought in a seasoned diplomat, Ambassador Taofeek Oladejo Arapaja. His victory yesterday, was a victory for democracy and the entire PDP family. There is a winner but there is no vanquished. The voters have spoken neatly with their votes.”

Are You Using $1.5b To Embalm Port Harcourt Dead Refinery? Dino Melaye Asks