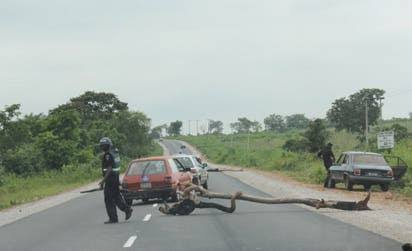 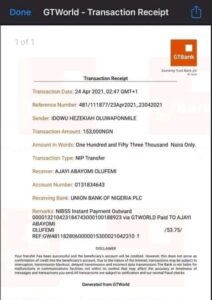 mounting a checkpoint at the Isiun area of Ogun State extorted him of N153,000 while on his way to Abeokuta from Ibadan, the Oyo State capital on April 24, 2021.

According to Oluwapomile, the officers, armed to the teeth, led him out of the car and asked what he does for a living.

Narrating his ordeal, the LASU student said: “I told them I am a LASU Student. They asked me to unlock my phone but I refused; they threatened to kill me if I didn’t cooperate with them. They brought out a shocker, so I obliged.

“The officers asked me how many bank accounts I had and how much was in each of them.

“I told them I had two, GT bank and Union bank.

“So I opened my phone due to the threat from them and upon going through it, I was asked to pay the sum of N1,000,000 but I told them I didn’t have up to that amount.

“Later on, they asked me to open my bank app, where they saw a balance of N288,000 and told me they would collect N250,000 out of it even without telling me what I did wrong.

“I begged them that I needed the money for some things; they insisted on collecting #150,000.

“The transaction receipt of the money transferred showed Ajayi Abayomi Oluwafemi with account number 0131834643 with Union Bank as the receiver of the extortion.”

According to Oluwaponmile, what the policemen did was more of armed robbery, adding that he was sure the Point of Sale (POS) operator was a collaborator with the accused Policemen.

Wait Till January To Know If Tinubu Will Contest, Fashola Says

Rivers Will Not Succumb Any Seccessionist Agenda, Wike Declares After Friday Night Attacks

Foreigners Exempted From NIN To Activate SIMs Every Six Months –...