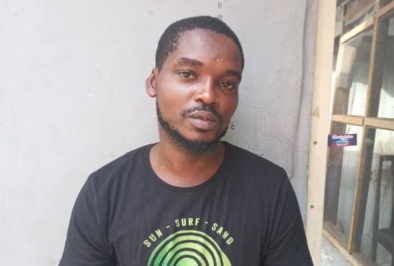 The Lagos State Police Command has confirmed the arrest of one Victor Ebhomenyen for driving against traffic, assaulting and causing severe bodily injuries on an Assistant Superintendent of Police, Erhator Sunday.

The video of the altercation between the 33-year-old man and the police officer attached to the Rapid Response Squad of the Command went viral on social media.

The Police Public Relations Officer in the state, CSP Muyiwa Adejobi, in a statement on Sunday, revealed that Ebhomenyen was arrested at Four Points Hotel, Oniru, Victoria Island.

He said: “The Command has deemed it necessary and responsible to react and set the record straight on the incident that was captured in a video that went viral on the social media on Saturday, 17th April 2021, where two men were repeatedly assaulting an officer on duty and creating a scene on the road at Oniru, Victoria Island, Lagos State.

“To set the record straight, on 17/4/21, at about 1030am, one ASP Erhator Sunday, m, and team attached to the Rapid Response Squad of the Command, who were on a convoy movement to drop off policemen at their various beats across the state, blocked and stopped a white Hyundai SUV, MUS 251 EH facing the convoy on “one way”, driven by the suspect, Victor, at Four Point Hotel, Oniru, Victoria Island, Lagos State.

“When the police stopped the vehicle, the occupants, one Victor Ebhomenye and Etinosa Obaywana, angrily came down, confronted and violently assaulted ASP Erhator Sunday, inflicting severe bodily injuries on him. The officer, who was armed with his official Ak 47 riffle, displayed a high level of professionalism amidst fierce provocations by resisting the temptation of using his rifle on the suspect.”

I Was Afflicted With Robbery By My Family At Seven, Suspect Says

‘I Have Fulfilled All My Campaign Promises, Now Is Time For Reward’ – Governor...

I Am The Most Prepared Presidential Aspirant, Osinbajo Boasts Ahead Of APC Primaries

Okowa Charges PDP To Take Advantage Of Disarray In APC To...