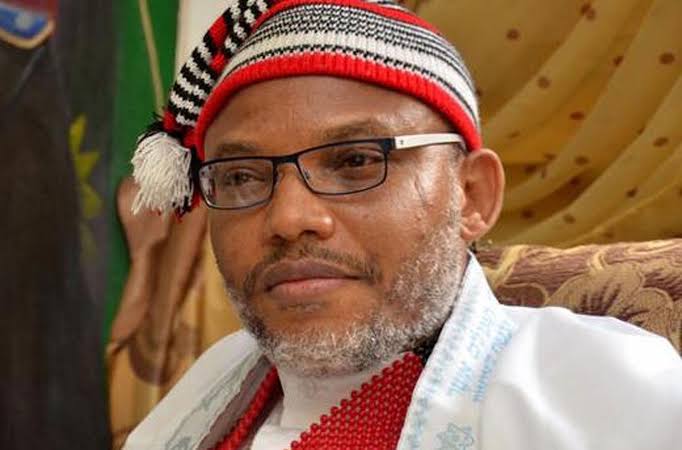 The detained leader of the Indigenous People of Biafra, Nnamdi Kanu has continued to call shots in the separatist movement even from his detention cell at the Department of State Services (DSS), as has ordered the sack of a new Radio Biafra broadcaster, Simon Ekpa.

According to a statement on Wednesday by the spokesman for the group, Emma Powerful, Kanu made the order from his detention over the alleged refusal of Ekpa to follow protocols and sign the rules of engagement and code of conduct for Radio Biafra broadcasters.

“Our leader Mazi Nnamdi Kanu gave the directive while in detention but Mazi Simon Ekpa has refused to follow the principles.

“Mazi Simon Ekpa has refused to sign the rules of engagement and code of conduct guiding those broadcasting on Radio Biafra. We don’t understand why Mazi Ekpa would not like to follow the steps of other broadcasters on the platform who have since done the needful.

“IPOB is a big movement, and cannot just change the rules because of one individual as this may set a bad precedence.

“Mazi Simon Ekpa is hardworking Biafran whose immense contributions towards the restoration of Biafra are highly appreciated, but for not signing the code of conduct as a broadcaster on Radio Biafra, he may not continue to have the opportunity of broadcasting via the platform.

“This decision was not intended to ridicule or undermine anyone but to prove to all that due process cannot be compromised in IPOB. IPOB is a well-structured movement where the activities of members are regulated with well-thought-out rules. No one should act in a way that suggests that the laws are meant for a certain group of people.

“While Mazi Simon Ekpa has the right to make his broadcasts on Facebook and other platforms of his choice, he may no longer broadcast on Radio Biafra as one of the official broadcasters.”

CAN Hits Buhari Over Hunger, Insecurity, Says Nigerians Are Frustrated

Umahi Reveals Those Allegedly Behind Insecurity In Ebonyi

Resign Or Be Shoved Aside, Ayade Reads Riot Act To Commissioners...