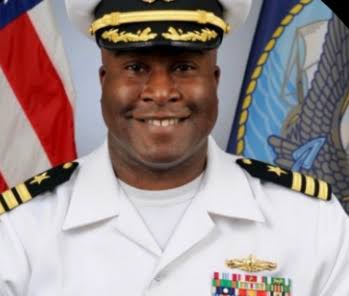 Ndukwe will take charge on Friday, April 2, 2021 in what has been described as a great milestone and key event that will set the stage for young children and future generations of Nigerian-Americans and other African countries in diaspora.

Commander Ndukwe, a Surface Warfare Officer, has served on multiple warships that include destroyers, cruisers, and mine countermeasures with extensive deployments to the Mediterranean Sea, Horn of Africa, Arabian Gulf, Western Pacific Ocean, and South America.

He qualified as Surface Warfare Officer aboard USS THORN (DD-988), where he served as Auxiliaries Mechanical Engineering Officer; USS NORMANDY (CG-60) as Fire-Missile Control Officer; Forward Deployed to Yokosuka, Japan aboard USS FITZGERALD (DDG-62) as Weapons Launching and Combat Systems Officer; Executive and Commanding Officer of USS DEVASTATOR (MCM-6), a minesweeper based in Bahrain; and most recently as the Executive Officer, USS HALSEY (DDG-97) in Pear Harbor, Hawaii.

Ndukwe also served in the Navy Office of Legislative Affairs, representing the Navy on Capitol Hill as a Congressional Liaison Officer. He also served as Surface Strike Requirement Officer-OPNAV 96 at the Pentagon, Washington DC; Deputy Executive Assistant to the Director for Surface Warfare on the Navy Staff, Washington DC; and Surface Warfare Branch Chief, Office of the Chairman of the Joint Chief of Staff.

Commander Ndukwe graduated from the University of Notre Dame with a Bachelor’s degree in Chemical Engineering through Navy ROTC scholarship and earned a Master’s degree in National Security and Strategy from the U.S. Naval War College.

2023: It’s North-Central’s Turn To Produce The Next Nigerian President – Saraki

Atiku Is Eminently Qualified To Contest For The Presidency, Obaseki Says

No Cause For Alarm! Police Say 147 Northerners Intercepted In Oyo...