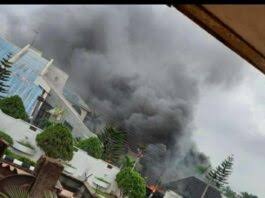 The house, located in Omuma in the Oru East Local Government Area of the state, was attacked on Saturday morning by the assailants, who were to have killed the security guards first before setting the building on fire.

Confining the development, the state Commissioner for Information and Strategy, Declan Emelumba, said that two security men at the governor’s house lost their lives during the attack.

Tinubu To Officially Unveil Shettima As Running Mate On Wednesday

Protest Erupts On Lagos-Ibadan Expressway As Straying Cows Cause Accident

Yoruba Elders Serve Buhari Quit Notice, Say He Has Nothing More To Offer