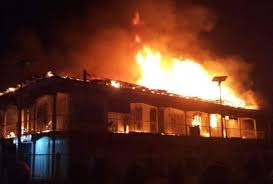 Reports reaching NaijaNewsNow indicate that the Cairo Market in the Oshodi-Isolo Local Government Area of Lagos State has been gutted by fire on Thursday night.

According to reports, the fire, whose cause was yet to be known, affected the fabrics section of the market.

Confirming the development, the spokesperson for Lagos State Emergency Management Agency, Nosa Okunbor, said emergency responders have arrived the scene and are battling to contain the fire.

Produce Kanu In Court Or We Embark On One Month Sit-at-home...