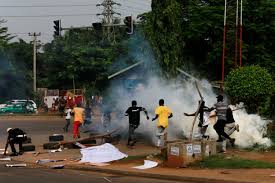 Rights Watchdog, Amnesty International has called on the Federal Government to stop the attacks on peaceful protesters in the country.

The group made this known in a statement on Saturday, stressing that it received reports of attacks on protesters.

The statement read: “Amnesty International has been receiving disturbing reports of attacks on peaceful protesters in Abuja, Lagos and Ibadan.

“Some protesters have also been arrested while others were injured.

“We again call on the Nigerian authorities to respect human rights and end attacks on peaceful protesters.”

Nigerians across the country and even overseas embarked on a June 12 Democracy Day on Saturday to demand an end to bad governance and insecurity, amongst other things.

Caught In The Act! 13 Suspected Internet Fraudsters in EFCC Net

‘Why The Igbo Again?’ Ohanaeze Ndigbo Condemns Attacks On Igbos Over Deborah Samuel