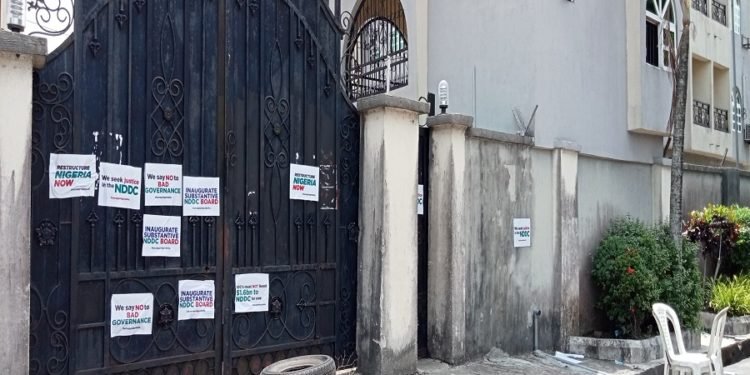 The Ijaw Youths Council (IYC) Worldwide has shut down the Warri office of the Niger Delta Development Commission (NDDC), in protest against Federal Government’s refusal to inaugurate a substantive board for the commission.

The youths, who had earlier on Wednesday morning shut down the Bayelsa State Office of the NDDC, also vowed to shut down the entire Niger Delta region in few hours.

They pasted stickers with inscriptions such as “Inaugurate substantive NDDC board,” We say no to bad governance,” IOCs must not remit $1.6 billion to NDDC for now,” Restructure Nigeria now, we seek justice in the NDDC” on the entrance of the NDDC building.

NaijaNewsNow had reported that the IYC gave the Federal Government a 30-day ultimatum to constitute the board otherwise face a shutdown of the Niger Delta region.

The National Secretary of IYC, Frank Pukon, while at the protest ground, said the youths will live up to the plans to close down the Niger Delta pending when President Muhammadu Buhari will appoint a substantive board.

Pukon said: “It’s quite disheartening that at this point in time, we are demonstrating for a substantive board to be set up, rather than calling on the Federal Government to come up with a development plan for the Niger Delta like they developed Abuja.

“In the next few hours, we will shut down the entire region, when I say shutdown, it includes the oil companies, pending when the president of the Federal Republic of Nigeria will hearken to the voice of reasoning.”

Rema Calls Out DJ Neptune For Releasing His Song Without Consent

Sanwo-Olu Advances Reasons Lagos Should Be Allowed To Collect VAT

Fix The Economy When You Become President, Falae Tasks Tinubu