Home Scoop ‘It Will Be Devastating’, IPOB Reacts To Igbo Leaders’ Stand On Secession 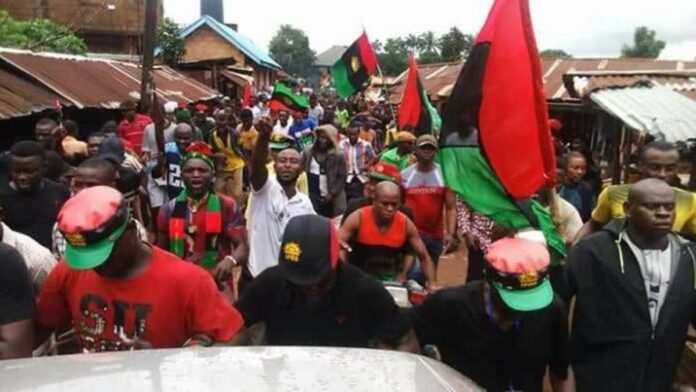 The Indigenous People of Biafra (IPOB) has reacted to the outcome of a meeting of the leaders of the South-East geopolitical zone, which disowned the group and their agitation for secession.

According to the proscribed group, “We too are also disowning them and our own would be so devastating. Whatever they like let them do.”

NaijaNewsNow reports that Igbo leaders, comprising of past and present elected leaders, religious leaders and traditional rulers, at a meeting in Enugu on Saturday, declared that IPOB and all other pro-Biafra groups are not speaking the South-East, declaring that they are committed to the unity of Nigeria.

However, the Publicity Secretary of IPOB, Comrade Emma Powerful, in his reaction on Saturday night, said the Igbo leaders had never been with his group from time.

“Were they with us before now?” Powerful asked.

He said further: “We were not looking for them before. We are not bothered about their statement or action towards the restoration of Biafra.

“It’s unfortunate that the general public never understood the position of the South East governors.

“The governors cannot talk and tell their master the position of their subjects because they know that their master would tell them to relinquish their political positions.

“They can say whatever they like, but we want to assure them that Biafra must come.

“We have the support and mandate of Biafrans both at home and abroad for the freedom and independence of Biafra, and nothing will stop it; not the compromised South East governors and other political job seekers.

“The governors are allowing their masters to kill innocent people so as to weaken the spirit of the struggle. But what they don’t know is that Biafrans are fully aware of the struggle for Biafra restoration.

“The governors are entitled to one vote during referendum. Even their families will vote for the freedom and independence of Biafra.”

The IPOB scribe further said that the Igbo leaders’ day of judgment would also come when they too would be publicly disowned.

He said: “We have been disowned by them before and saying it now means they do not know what they are doing.

“We too are also disowning them and our own would be so devastating. Whatever they like let them do.”

One Inmate Dead, 12 Others Injured In Attempted Jailbreak In Port Harcourt Prison

I have Nothing To Do With Banditry, former Head of State,...

Not Again! Four Killed, 17 Abducted As Bandits Attack School In...