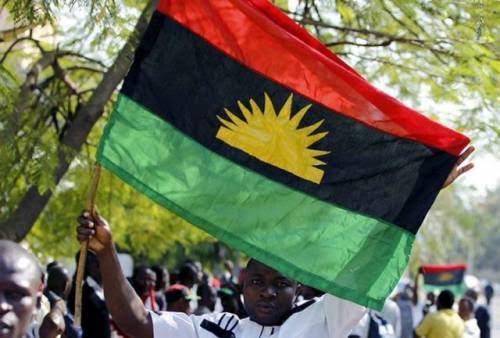 Irked by what it called the unleashing of violence on innocent people and burning of houses in the South-East by the Army and the Ebubeagu security outfit, the Indigenous People of Biafra (IPOB) has vowed to carryout a revenge.

The proscribed group also warned that anyone, including governors of South-East states found to be sponsoring and encouraging the onslaught against the people, will not go unpunished.

IPOB also described the destruction of properties and killing of innocent people suspected to be IPOB members or supporters as genocide against Biafra land, adding that the people involved would soon pay for their “treachery and cruelty” to fellow citizens.

The secessionist group made the threat in a statement on Wednesday by its Media and Publicity Secretary, Emma Powerful.

The group, which challenged South-East governors to rise against the situation, if they had no hand in it, noted that there was nowhere in the North where innocent villagers were being attacked by security agents and their houses set on fire.

According to Powerful, the Nigerian Army had burnt down over 30 houses of innocent citizens in Enugu, Imo and Ebonyi states because they were Igbo and sympathisers of IPOB in less than one week, claiming that the Federal Government had concluded arrangements to introduce Internally Displaced Persons’ camps in the region as was in the case in the North.

The statement read in part: “IPOB will not allow this barbarity and cruelty to continue. We will avenge these unprovoked and needless attacks against the houses of innocent Biafran citizens. The mindless burning down of houses in our region by Nigerian security operatives and Ebubeagu cannot go unreciprocated.

“We warned against the formation of Ebubeagu in Biafra land because we knew they were coming to collude with the security agencies in killing our people.

“But the people ignored our warning, and today, we have been vindicated. Our fears have come true, but the wicked will not go free. For doing this to our people, we declare that the days of Ebubeagu in Biafra land are numbered. They will pay for what the military is using them to do against their fellow Biafrans.

“Very soon, we will make public the total number of houses so far burnt down in different parts of Biafra land, especially in Enugu, Imo and Ebonyi states.

“We also want the governors of these states to take note, and not blame IPOB for any reprisal, because we can’t fold our arms and allow criminals in security uniforms to continue to commit genocide in Biafra land unchallenged. Since nobody is defending our hapless people, we shall not abandon them. Enough is enough!”

IPOB further condemned the Ohanaeze Ndigbo leadership and politicians in the region for doing nothing while evils were being perpetrated in the land.

“The Nigerian Army and the police, which cannot withstand terrorists rampaging and ravaging the whole North, must pay for their treachery! They will soon face the wrath of the people. Ohanaeze Ndigbo leadership and the politicians are not left out, because they have done nothing to stop the mayhem.

“Elders and stakeholders in the South-East region should not beg us to calm down when we begin to pay back these agents of death and sorrow in their own coin. Instead, they should tell the Army and the police to stop burning down people’s properties now. By the time we shall begin to reciprocate these atrocities, we won’t listen to anybody.

“South-East governors must rise against this barbarity if they have no hand in it. There is nowhere in the North where innocent villagers are invaded by security agents and their houses set on fire”, IPOB statement added

NMA Threatens To Withdraw Its Services If Abducted Doctor Is Not Released In 48...

Deadly Libido! Man Beats Wife To Death In Edo For Denying Him Sex

There Is No Plan To Depose Ataoja Of Osogbo, Osun Govt Says